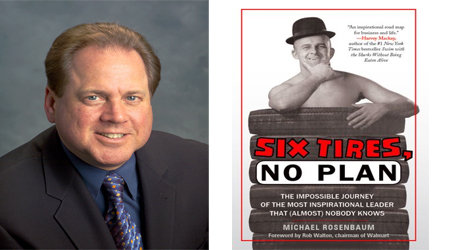 Everyone wants to know the secret of going from dead broke to filthy rich. The all-American dream becomes an all-American reality in the inspiring story of a simple Midwestern man who used his skill, kept his faith, persevered, and most of all worked hard.  He took a tire and created an empire.

Bruce Halle is the billionaire that almost nobody knows, but that is going to change. The secrets of Halle’s success are revealed in a new book Six Tires, No Plan, written by business expert Michael Rosenbaum. Halle’s story is a true rags-to-riches story of a man who was unemployed with $17,000 in debt. Today, he is ranked as the 96th richest American by Forbes. He is the founder and chairman of Discount Tire, the nation’s largest independent tire-dealer, with 800 stores around the country and revenue of over three billion dollars last year. Halle is one of the most inspirational leaders but few know his story because he rarely grants media interviews.

Now, for the first time, his life story will be brought to light, thanks to Rosenbaum. The book reveals that it’s not impossible to go from nothing to a billionaire without even a business plan.

Rosenbaum is a business consultant and a former financial journalist at United Press International and Chicago bureau chief for the Journal of Commerce.  As president of the nation’s largest investor relations agency, Financial Relations Board, Rosenbaum managed operations of a $35 million business with five offices and 300 employees.  He also advised CEOs and CFOs of more than 150 companies – including the founders of dozens of companies — regarding strategic, financial, and marketing issues.