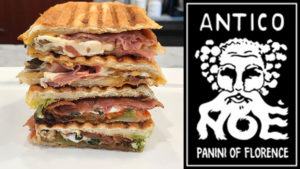 www.anticonoe.com There new
store is at 220 East 53rd. Street, New York, Ny
10022 ANTICO NOÈ . For over 70 years Antico Noè has built a cult-like
following out of a tiny storefront in an arcaded alley off the Piazza San
Pier Maggiore in Florence, Italy serving delicious and authentic Italian
panini. Now, thanks to two young entrepreneurs Michael Grant and Vinny
Dautaj (who met while living in Florence nine years ago), Antico Noè has
arrived in the U.S. with its first store in Midtown Manhattan replicating
the Florentine legend down to its last breadcrumb. After graduating from
Indiana Universitys Kelley School of Business, Michael quickly established
himself in the world of corporate restructuring and despite a burgeoning
career, he always had a hankering to do more.to create his own destiny.

Who knew this destiny would stem from a semester studying Renaissance Art in
Florence, Italy in 2007. Michael spent the semester in Florence coming to
appreciate the art, history and culture, but most of all, the food.
Something that would set him on a path to become the entrepreneur he had
always imagined himself to be. While living in Florence, Michael, as most
others visiting and living in Florence, came to love Antico Noè, going as
far as eating there at least three times a week. Truth is, so did a lot of
visitors before him. The difference is, it stayed with Michael from the
moment he left Italy.
Also during his time in Florence, Michael would befriend his now business
partner Vinny Dautaj, who worked at a local restaurant in Florence. As fate
continued to play its hand, Vinny would go on to marry an American girl,
move to New York and reconnect with Michael. Monthly catch-ups often turned
into discussions of dreams and goals. The two of them, both itching to do
more, kept coming back to the incredible business and following of Antico
Noè and how nothing in NYC compares. The two formed a strategy for Vinnys
next trip home to Florence where he would recite a well rehearsed pitch to
convince the owners of Antico Noè to let the duo replicate their
authenticity in the US.

After months of discussions, the two, utilizing their respective backgrounds
in corporate finance and restaurant operations, convinced the Italian owners
to expand the brand to the U.S. under their control. To ensure consistent
quality and an adherence to tradition and taste, the US-based team studied
and trained at the Florence location learning the various secret bread and
sauce recipes, as well as coming to understand the magic of the little
sandwich shop in order to replicate and offer an authentic panini
experience.

In 2020 we will take our event to 193 countries and other locations to create the largest world gathering & broadcast to share Peace, … END_OF_DOCUMENT_TOKEN_TO_BE_REPLACED