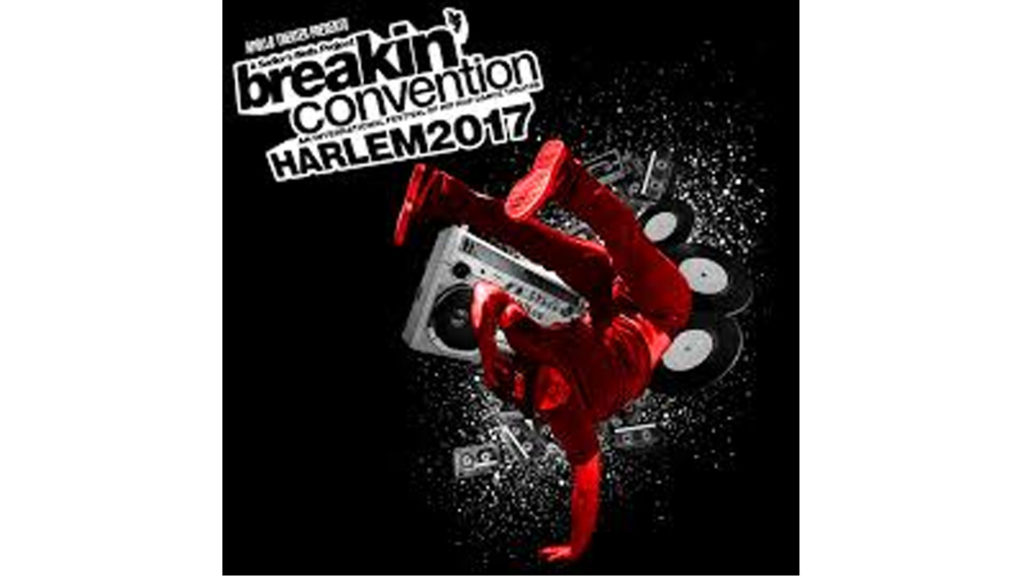 Festival Expands to Week-long Celebration to Include:

WHAT: The Apollo Theater presents the return of London’s Sadler’s Wells’ critically acclaimed international hip-hop dance theatre festival—Breakin’ Convention, one of the world’s greatest celebrations of hip-hop culture now in its third year. Mainstage performances will take place October 27 – 28 at 7:30 p.m., and will feature an appearance by hip hop legend Biz Markie, who will act as co-host.

Curated and hosted by nationally recognized U.K. hip-hop emcee and theater pioneer Jonzi D, Breakin’ Convention will take over the entire Apollo building and will include performances by world renowned dance companies and local crews. In addition to the mainstage performances, this year’s Festival is expanding to a week-long series of events and activities consisting of artist talks, master classes, dance workshops, freestyle sessions, an art exhibition by Carlos “Mare139” Rodriguez, and special Breakin’ Convention-themed editions of the Theater’s signature programs, Apollo Music Café and Family Workshop.

This year’s festival will also directly address several pressing issues that are part of America’s current sociopolitical landscape through performances and accompanying events, with highlights including an artist talk with dancers Jon Boogz and Lil Buck centered on dance as a tool for social justice and prison reform.

PHOTO OP: All media outlets interested in covering any of the Breakin’ Convention Festival, MUST submit requests via email to Nina Flowers at nina.flowers@apollotheater.org

ABOUT US: The legendary Apollo Theater—the soul of American culture—plays a vital role in cultivating emerging artists and launching legends. Since its founding, the Apollo has served as a center of innovation and a creative catalyst for Harlem, the city of New York, and the world.

With music at its core, the Apollo’s programming extends to dance, theater, spoken word, and more. This includes 100: The Apollo Celebrates Ella blockbuster concert, the annual Africa Now! Festival, and the recent New York premiere of the opera Charlie Parker’s YARDBIRD. The Apollo is a performing arts presenting organization that also produces festivals and large-scale dance and music works organized around a set of core initiatives that celebrate and extend the Apollo’s legacy through a contemporary lens; global festivals including the Women of the World (WOW) Festival and Breakin’ Convention, international and U.S.-based artist presentations focused on a specific theme; and Special Projects, multidisciplinary collaborations with partner organizations.

Since introducing the first Amateur Night contests in 1934, the Apollo Theater has served as a testing ground for new artists working across a variety of art forms, and has ushered in the emergence of many new musical genres—including jazz, swing, bebop, R&B, gospel, blues, soul, and hip-hop. Among the countless legendary performers who launched their careers at the Apollo are D’Angelo, Lauryn Hill, Machine Gun Kelly, Miri Ben Ari, Ella Fitzgerald, Sarah Vaughan, Billie Holiday, James Brown, Michael Jackson, Gladys Knight, Luther Vandross, and Stevie Wonder; and the Apollo’s forward-looking artistic vision continues to build on this legacy

Lenfest Center for the Arts

Hip-hop music and culture have reverberated far beyond their birthplace on the streets of New York. From the favelas of Brazil to the trenches of the Arab Spring rebellion, the music fuels and inspires countless millions around the globe. Harlem’s World Famous Apollo Theater and Columbia University’s Undergraduate Committee on Global Thought present this compelling exploration of hip-hop music’s impact on global culture and social consciousness.

October 26 Battlefest at the Apollo

Battlefest is one of the biggest and most elite dance competitions in the underground hip-hop community. Dancers from all over the nation will flock to the Apollo to participate in structured one-on-one battles.

Mayhem Poets. Most appropriate for grades 4–12.

This dance party under the iconic Apollo Marquee is hosted by Jorge “Popmaster Fabel” Pabon and features some of NYC’s hottest dance crews, Floatmasters and It’s Showtime NYC. Performances by The Beatbox House NYC with live graffiti by Letters First Crew.

Free and open to the public.

This 90-minute family workshop teaches elements of hip-hop and how to use your body to create unique beats. The session will feature a participatory cypher and ideas on how you can take the hip-hop experience back home. Led by Momma’s Hip Hop Kitchen, an all-women’s hip-hop collective. With guest artists MC LiKWUiD and the cypher collective Toni Blackman’s Rhyme Like a Girl Collective.

Appropriate for ages 8 and up. Children must be accompanied by an adult for the duration of the workshop.

Free screening with post-screening talk with the film’s director, Lance Steagall. GET LITE is a documentary film featuring Litefeet dancers, known to most New Yorkers for their cries of SHOWTIME! on the subway.

This dance party under the iconic Apollo Marquee is hosted by Jorge “Popmaster Fabel” Pabon and features some of NYC’s hottest dance crews, Floatmasters and It’s Showtime NYC, performances by The Beatbox House NYC with live graffiti by Letters First Crew.

Free and open to the Public