You are here: Home / Arts & Leisure / Music and Dance / The Apollo Theater Presents Southbank Centre’s Women of the World Festival 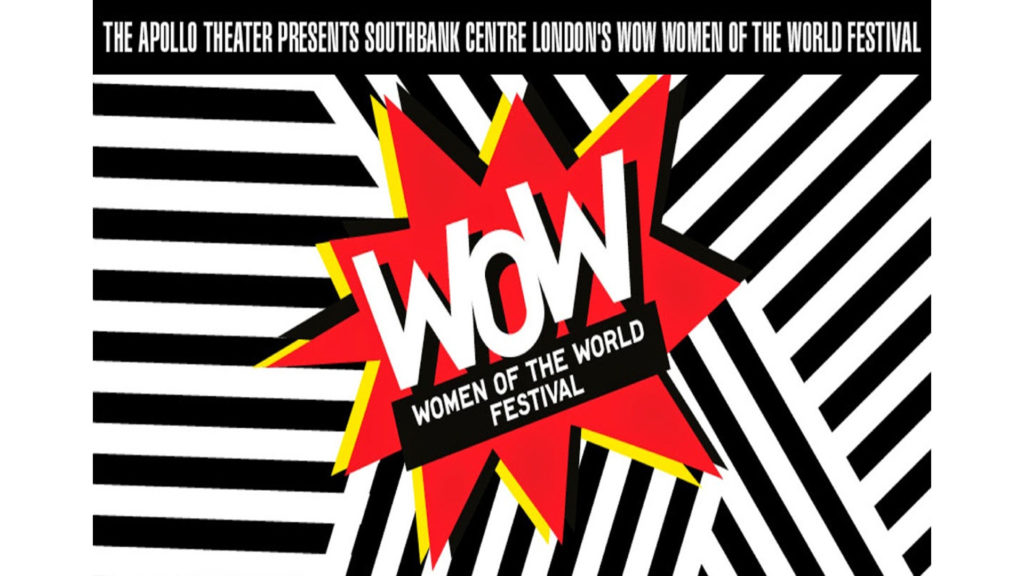 Friday May 4th – Sunday May 7th

WHAT: Women of the World (WOW) Festival

The Apollo Theater will gather artists, activists, and leaders from around the globe for the return of the WOW – Women of the World Festival, a four-day festival presented in collaboration with the Southbank Centre London on May 4-7, 2017. Founded in 2010 by Southbank’s Artistic Director Jude Kelly and originating at Southbank Centre, London, the international festival celebrates women and girls and promotes gender equity. The Festival made its New York premiere at the Apollo in 2015.

Highlights of the WOW Festival include conversations with Lupita Nyong’o, Gabby Douglas and Gabourey Sidibe as well as performances by Dee Dee Bridgewater, Dianne Reeves and Esperanza Spalding.

Thursday, May 4, 2017
Live Wire: Performance and the Politics of Style
6:30PM – Apollo Theater Soundstage
A discussion led by scholar and author Salamishah Tillet, that will explore artists who assert their own narratives of artistic and political freedom in ways at times appealing and controversial.

Friday, May 5, 2017
Jumping at the Sun: The Moth at the Women of the World Festival
7:30PM – Apollo Mainstage
Join The Moth and the Apollo for stories of conviction, humility, and voices that carry. Hosted by Detroit native Dame Wilburn, this performance features five storytellers telling true personal stories from Harlem to Africa — and beyond.

The program will feature Gabourey Sidibe (presented in partnership with Pen World Voices) who will share her journey from Harlem to Hollywood with highlights from her irreverent and hilarious new memoir, This Is Just My Face: Try Not to Stare.

Under the musical direction of GRAMMY Award-winning drummer, composer, and producer Terri Lyne Carrington, an all-star line-up of vocalists including Dianne Reeves, Dee Dee Bridgewater and Esperanza Spalding will celebrate the life, music and legacy of Abbey Lincoln, presented on tour by the Kennedy Center, Washington, D.C.

Apollo Music Café Featuring Carmen Rodgers and Zo!
10:00PM – Apollo Theater Soundstage
Carmen Rodgers, joined by Zo!, will present tunes from all of their projects including their newest releases Stargazer and Skybreak, and more!

A day of free panel discussions, interactive workshops and performances featuring Academy Award-winning actress Lupita Nyong’o, who will perform a dramatic reading of selections from Chimamanda Ngozi Adichie’s novel Americanah; three-time Olympic gold medalist Gabby Douglas, who will take part in an intimate conversation on cyber bullying; a panel with National Co-Chairs of the Women’s March on Washington Tamika Mallory and Carmen Perez as they discuss what it takes to create an inclusive movement that also stands against racism, homophobia, transphobia, ableism, xenophobia and classism, and the issues shaping the feminist agenda in the 21st Century.

WHEN: Thursday May 4th – Sunday May 7th

PHOTO OP: All Media MUST RSVP prior to event. ALL requests for coverage must be submitted on company letterhead to Nina Flowers via email to nina.flowers@apollotheater.org or fax 212.749-2743.

ABOUT US: The legendary Apollo Theater—the soul of American culture—plays a vital role in cultivating emerging talents and launching legends. Since its founding, the Apollo has served as a center of innovation and a creative catalyst for Harlem, the city of New York, and the world.

With music at its core, the Apollo’s programming extends to dance, theater, performance art, spoken-word initiatives, and more. Recent highlights include James Brown: Get on the Good Foot, which began an international tour in 2015, the Africa Now! Festival and Apollo Club Harlem. The Apollo is a presenting organization that also produces festivals, large-scale dance and music works organized around a set of core initiatives: Apollo Music; Signature Programs—Amateur Night, Salon Series and the Apollo Music Café; Legacy Series, work that celebrates and extends the Apollo’s legacy through a contemporary lens; Global Festivals, international and U.S.-based artist presentations focused on a specific theme; and Special Projects, multidisciplinary work with partner organizations.

Since introducing the first Amateur Night contests in 1934, the Apollo Theater has served as a testing ground for new artists working across a variety of art forms, and has ushered in the emergence of many new musical genres—including jazz, swing, bebop, R&B, gospel, blues, soul, and hip-hop. Among the countless legendary performers who launched their careers at the Apollo are D’Angelo, Lauryn Hill, Machine Gun Kelly, Miri Ben Ari, D’Angelo, Ella Fitzgerald, Sarah Vaughan, Billie Holiday, James Brown, Michael Jackson, Gladys Knight, Luther Vandross, and Stevie Wonder; and the Apollo’s forward-looking artistic vision continues to build on this legacy.