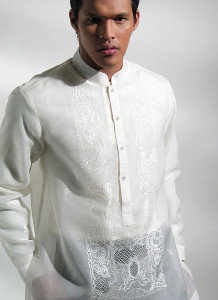 The barong Tagalog (or simply barong) is an embroidered formal garment of the Philippines. It is very lightweight and worn untucked (similar to a coat/dress shirt), over an undershirt. In Filipino culture it is a common wedding and formal attire, mostly for men but also for women. The term “barong Tagalog” literally means “a Tagalog dress” in the Tagalog language; however, the word “Tagalog” in the garment’s name refers to the Tagalog region, not the region’s language of the same name.

The barong was popularized as formal wear by Philippine President Ramon Magsaysay, who wore it to most official and personal affairs, including his inauguration as president.

Long before the Spaniards arrived in the Philippines, the Tagalog people on Luzon Island already wore a dress that can be seen as the origin of the barong Tagalog. The dress reached slightly below the waist, was colorless and had an opening in the front.

A legend persists that the Spaniards made Filipinos wear their barong untucked to distinguish them from the ruling class; its translucent fabric allegedly helped the Spaniards to see that the wearer was not bearing a weapon underneath. Supposedly, the native Filipinos were also prohibited from tucking in their shirts, which served to designate their low rank as well as to distinguish them from the people of mixed descent, the mestizaje, and the islanders, or insulares. This is only a legend, as Filipinos already wore untucked shirts in the pre-Hispanic times, something common in tropical climates where temperatures and humidity are high.

Sociologists have argued against this theory, however, pointing out that untucked style was very common in pre-colonial southeast- and south-Asian countries, and that the use of thin, translucent fabric developed naturally given the heat and humidity of the Philippines. Historians, likewise, have noted the absence of a citation to the specific law in which the Spaniards supposedly prohibited the natives from tucking in their shirts. They also note that natives during the Spanish era wore their shirts untucked at times. A common example cited in support of this argument is José Rizal and his contemporaries, who were photographed in western clothing with their shirts tucked—although the era of the barong predated Rizal’s time.

Another disputed theory is whether the barong was a local adaptation or a precursor to the guayabera, a shirt popular in Latin-American communities. According to those who claim that the barong is the precursor of the guayabera, the guayabera shirt was originally called the “Filipina” during the era of Manila galleon trade ships when it was brought to Mexico from the Philippines.
Barong Tagalog

The Barong Tagalog is mostly for men, but it is sometimes for women.