You are here: Home / Today's Good News / All the Best VISIONARY President Donald Trump – Good News goes, (along with hundreds of birds!) to the Theodore Roosevelt Park at the Museum of Natural History to share the attributes of Roosevelt and focus on one of them, VISION. We wish our new president to grow with all the virtues that the museum felt Roosevelt endeared and inscribed on their front of Central Park West Façade. Videos and Podcasts. 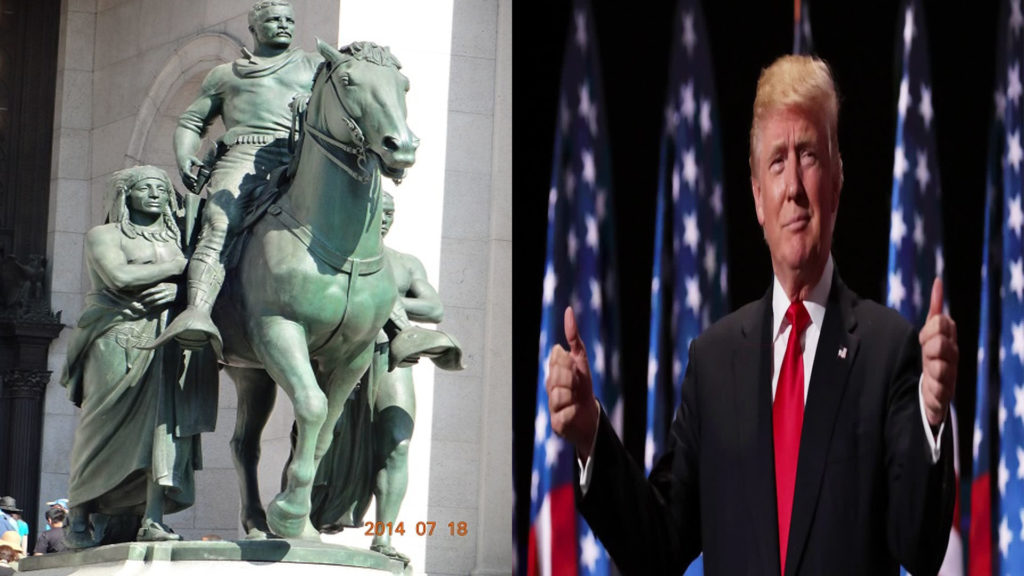 President Donald Trump
Donald John Trump (born June 14, 1946) is an American businessman, television personality, politician, and the President-elect of the United States. He is scheduled to take office as the 45th President on January 20, 2017.
Born and raised in Queens, New York City, Trump received an economics degree from the Wharton School of the University of Pennsylvania in 1968. In 1971, he took charge of his family’s real estate and construction firm, Elizabeth Trump & Son, which was later renamed The Trump Organization. During his business career, Trump has built, renovated, and managed numerous office towers, hotels, casinos, and golf courses. He owned the Miss USA and Miss Universe pageants from 1996 to 2015, and has lent the use of his name in the branding of various products. From 2004 to 2015, he hosted The Apprentice, a reality television show on NBC. As of 2016, Forbes listed him as the 324th wealthiest person in the world (113th in the United States), with a net worth of $4.5 billion.
Trump sought the Reform Party’s presidential nomination in 2000, but withdrew before voting began. He considered running as a Republican for the 2012 election, but ultimately decided against it. In June 2015, he announced his candidacy for the 2016 election, and quickly emerged as the front-runner among 17 contenders in the Republican primaries. His final opponents suspended their campaigns in May 2016, and in July he was formally nominated at the Republican Convention along with Mike Pence as his running mate. His campaign received unprecedented media coverage and international attention. Many of his statements in interviews, on social media, and at campaign rallies were controversial or false.[2][3][4] Trump won the general election on November 8, 2016, against Democratic rival Hillary Clinton. At age 70, he will become the oldest and wealthiest person to assume the presidency, the first without prior military or governmental service, and the fifth elected with less than a plurality of the national popular vote.
Trump’s platform emphasizes renegotiating U.S.–China relations and free trade agreements such as NAFTA and the Trans-Pacific Partnership, strongly enforcing immigration laws, and building a new wall along the U.S.–Mexico border. His other positions include pursuing energy independence while opposing climate change regulations such as the Clean Power Plan and the Paris Agreement, modernizing and expediting services for veterans, repealing and replacing the Affordable Care Act, abolishing Common Core education standards, investing in infrastructure, simplifying the Internal Revenue Code (tax code) while reducing taxes across the board, and imposing tariffs on imports by companies offshoring jobs. He advocates a largely non-interventionist approach to foreign policy while increasing military spending, “extreme vetting” of Muslim immigrants to preempt domestic Islamic terrorism, and aggressive military action against Islamic State of Iraq and the Levant (ISIL). His positions have been described by scholars and commentators as populist, protectionist, and nationalist.

Anthem by Leonard Cohen for our Paris Peace Tribute, Submitted by Elizabeth Davis.
Next Post: The Stewart Family is sadden to announce the passing of Chuck Stewart. Chuck was an American photographer best known for his portraits of jazz singers and musicians such as Louis Armstrong, Count Basie, John Coltrane, Ella Fitzgerald, and Miles Davis, as well as artists in the R&B and salsa genres. Stewart’s photographs have graced more than 2,000 album covers.