Book Signing and Lecture with Ralph Singh, Author of “A Path to Follow: A Life”

You are here: Home / All We Need Is Love / Good Samaritans / Book Signing and Lecture with Ralph Singh, Author of “A Path to Follow: A Life” 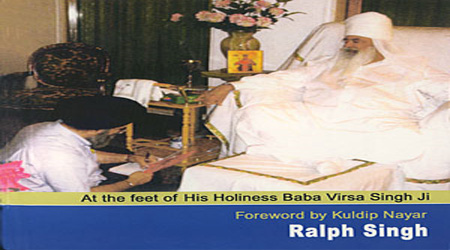 Ralph Singh, at age 22, had a powerful vision in New York that led him to India on a classic quest for Truth. It was there, in 1971, where he came face to face with the One who had appeared to him, His Holiness Baba Virsa Singh ji of Gobind Sadan, arguably one of the world’s greatest spiritual figures. In the book, he shares the lessons learned at Babaji’s feet of how to follow the most difficult path of all, leading a spiritual life while fully engaged in the trials and challenges of everyday life: marriage and raising a family, running a business, and serving in community projects aimed at alleviating the problems of the world. You may go to gobindsadan.org to get a further experience of where Ralph Singh spent his time and journey. Ralph Singh’s book shares his journey and lessons in a very inspiring, down to earth way that motivates any reader of any faith. Biography: Ralph Singh likes to be known as an ordinary person who continues to have extraordinary life experiences: from the powerful vision that drew him from New York to the feet of one of the world’s greatest spiritual leaders, His Holiness Baba Virsa Singh, in India at the age of 22. This is where he became his first foreign devotee, to his involvement in the community building efforts surrounding the post 9-11 arson attack on his spiritual community Gobind Sadan, USA, north of Syracuse, NY. Over the last 33 years Ralph has devoted his time to forging community and working to find ways to define civil society. He has worked in education developing and teaching a course called “Exploring Spirituality” and helped design and name the “Schools of Character” project for the Central NY Education Consortium. In the community he has coordinated programs aimed at breaking down barriers between the disabled and able-bodied communities, served as Chair of the City County Human Rights Commission, and, together with his wife Joginder, transformed “soup-kitchens” into “community meals” to break down class barriers and helped to develop community based farmers’ markets. Following the 1984 attack on the Golden Temple, he organized a consortium of International Human Rights Groups to draw attention to the plight of the Sikh community in India, and earlier had helped pioneer education programs for Sikh youth in America. Through the United Nations Association, Ralph helped establish the CNY MUN at S.U. and served on the National Council of UNA-USA under Elliot Richardson’s leadership. He developed and coordinated drug awareness programs for local schools. Known for his efforts in building interfaith relations, he help launch and served as Vice-chair of the North American Interfaith Network. He still serves on the advisory board of the Maxwell School’s Program on Analysis and Resolution of Conflict. Ralph was the founding President of Gobind Sadan, USA, and currently serves as President of Gobind Sadan Community Services, and as Director of Publications and Public Relations for the Gobind Sadan Society for Interfaith Understanding. As long as Babaji was on this earth, Ralph served as His translator in international gatherings and as his representative at major conferences including the Millennium Peace Summit. He has lectured and written on the importance of values and spirituality in modern society, and has represented the teachings of the Sikh Gurus to national and international audiences from the Smithsonian Institution to local interfaith dialogues. He is a graduate of The Gunnery, received his degree in Japanese Area Studies from the University of Rochester, and maintains a lifelong study/practice of prayer and meditation and spiritual traditions. http://eastwestnyc.com/events.html?trumbaEmbed=view%3Devent%26eventid%3D81034116″>http://eastwestnyc.com/events.html?trumbaEmbed=view%3Devent%26eventid%3D81034116 http://www.exploringspirituality.org www.exploringspirituality.org