You are here: Home / Good News To Go / Christopher Columbus 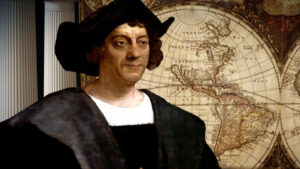 Discovering Columbus
By Ron Basci
Written for the New York Press Club 1992 publication
500th Anniversary of his historic voyage.
Style: As a letter to an elementary school aged child.

Dear Rory,
You asked me why we celebrate the Christopher Columbus holiday. You say he really didn’t discover the Americas and some of your classmates say his journeys led to the destruction of several civilizations and cultures. So why should we make such a big fuss that 500 years ago some guy went sailing?
Well, Rory, I’ll tell you. What we are celebrating is nothing less than life itself, and the spirit of Christopher Columbus is nothing less than that. First, he is universally acclaimed. His accomplishments are remembered throughout Europe, Latin America, the Caribbean and North America, and even the people of Japan are celebrating this anniversary of his voyage.
He was born Italian, lived in Portugal, travelled to Africa and England, sailed for Spain, and came to the Americas. He was a practicing Catholic who may have had recent ancestors who were Jewish. It seems that almost everyone wants to claim him as their own and there are some very good reasons why.
Columbus was a man who perservered. It was many years from the time he requested money for his project until he received the funding. Yet, he never gave up, and that is an important lesson to grow with.
One thing Columbus was trying to do was to find a new way to deal with an old problem: how to get important spices and other goods from a distant part of the world (the Indies) back to Europe more efficiently. His research and development project was designed to upgrade the quality of life. So, just as many of us today work so that our countries, the world and ourselves may benefit, so too did Columbus as he set sail for the Indies and Cipango (that’s what he called Japan.)
What he did was really not so different from what we do today when we try to find solutions to problems like housing for the homeless, eliminating pollution, and finding a cure for AIDS.
We celebrate the courage of Columbus because he was a gutsy wanderer who didn’t know how to get to where he was going – but who went anyway. When you visit the statue at Columbus Circle in New York City, you will see another one, located at the column base. It’s called “Genius of Discovery” and reminds us that great things may be found if we only look, and trust in ourselves.
Did Columbus really “discover” the Americas? No, not really. But his voyage of 1492 set history rolling on the European, North and South American continents, and those reverberations are still shaping the entire world to this day.

Because of the journey, vastly different cultures met and mingled. Foods like corn, potatoes, peaches and onions were introduced to new worlds. Horses and cattle were brought to the Americas and life was forever changed for all mankind.
But not all changes were for the better – things rarely turn out that way. Poverty, disease, war, hunger and slavery were facts of life on all continents long before Columbus was born and they are still with us today.
Some of the unfortunate gifts brought from Europe were germs and diseases not before encountered by the earlier Americans. These had devasting effects on their populations and some groups disappeared completely. But is Columbus, or anyone for that matter, to blame for this? Of course not.
When a door is opened, no one can tell exactly what is going to pass through – in either direction. Into the Americas came good and bad, and likewise, out went good and bad, too. We should weigh the total experience before coming to a judgment.
Why do we celebrate Columbus? Because his is the spirit of the journey, life’s journey. Celebrate your belief in yourself, and the courage to make a decision and to take action. Actions result in consequences – some minor, and some – like Columbus’, that shape the world for future generations. We celebrate Columbus because he manifested that spirit of life by making that ocean voyage and we are all, in the balance, much the better for it.
Rory, you like everyone else, will make decisions and take actions through your life, but you may never be certain what the consequences will be. Nevertheless, that must not deter you from your choices. Think, choose and act.
You see, Rory, perhaps we are all very much like Christopher Columbus. We too, would like to get to Cipango, but we really aren’t certain how to get there. So, let’s celebrate on the 500th anniversary of his great adventure. Like Columbus, may we all be persons with bold ideas and the wherewithal to carry them out…To travel fearlessly into the unknown and attempt to create a better future.
Happy sailing, Rory.

Mauro F. Guillén is one of the most original thinkers at the Wharton School…
Next Post: Global HandWashing Day! From Leah Zveglich