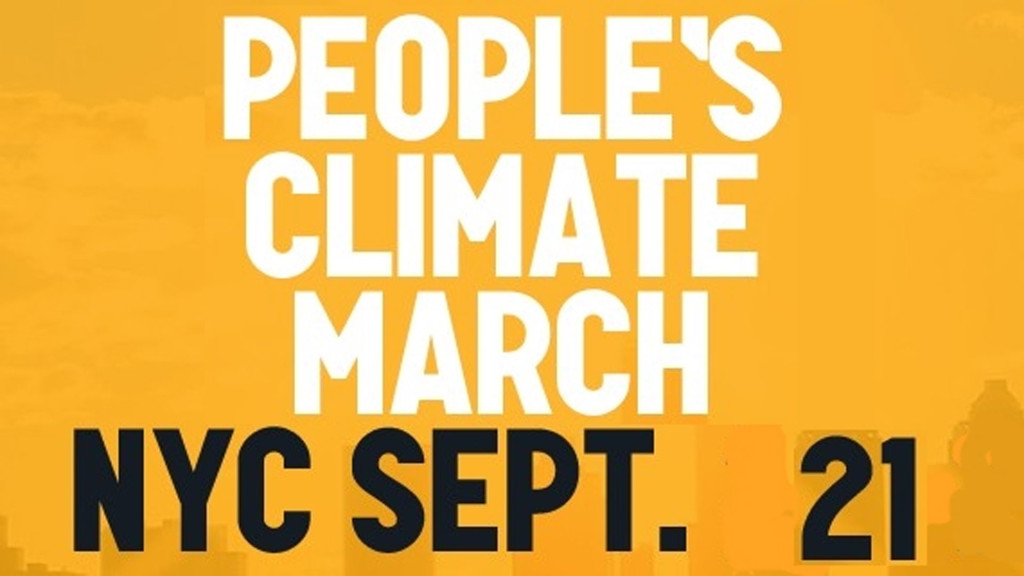 www.peacedayparty.org joining People’s Climate march. We speak to Dan Sherrell at http://www.350.0rg/ .   We will meet at 1PM at 65<sup>th</sup> and CPW and march as a Human Peace Sign to the 34 st. and 11 Ave. location and create a larger Human Peace Sign.  We will hold the flags of the Un from the World Peace Prayer Society, Hugg A Planets representing the rest of the world and the animal and plant kingdom.  We will walk over from our Human Peace Sign in Central Park at 10am at the Band Shell at 72<sup>nd</sup> Street/Crossover/The Mall where we are an event at the International Peace Vigil, which we have been involved for 13 years.  Here is the latest press release from Peoples Climate March.

New York, NY — In response to the United Nations’ Emergency Climate Summit, an unprecedented surge of tens of thousands of students from more than 300 campuses will join the People’s Climate March, which is anticipated to be the largest demonstration on climate change in history. Students have built a movement on hundreds of campuses to demand fossil fuel divestment and local solutions, and they’re joining the movement to demand bold climate action and an end to extractive industries as President Obama and world leaders meet at the United Nations.

“Students on hundreds of campuses, and thousands of youth vote leaders across the country are bringing their power and voices to the People’s Climate March to say enough is enough, we will divest from fossil fuels and build a new clean and just economy, and President Obama and world leaders better be prepared to join us, or face the political consequences,” said Maura Cowley, director of Energy Action Coalition.

The People’s Climate March will bring together a broad coalition of students, union workers, environmental justice organizations, survivors of Hurricane Sandy, and more. More than 1000 organizations have endorsed the march, and students from more than 300 colleges and universities will be attending and will march together to demonstrate the power and the demands of the millennial generation.

Student groups are joining the People’s Climate March from campuses across the country — over 45 campuses in New York alone are organizing students to attend, and students are organizing buses, trains and car pools from the West Coast, Historically Black Colleges &amp; Universities and youth community organizations.

Students on more than 45 campuses from across New York state and city–including CUNY campuses, SUNY Buffalo, Cornell University and more–are organizing for the march, anticipating turning out thousands of young activists.
Students from more than 15 HBCUs (Historically Black Colleges &amp; Universities) will attend the march to represent the next generation of African Americans demands for environmental justice.
Non-environmental youth organizations like the United Students Against Sweatshops, Student/Farmworker Alliance and Hillel have endorsed the march and will be mobilizing their members.
In conjunction with the New York City Department of Education’s Sustainability Department, NYC teachers and parents associations across the city are introducing curriculum and back to school materials to engage more students. Students who submit the most #SelfiesToSaveTheWorld at the People’s Climate March will will a $5000 Sustainability Grant for their school.
Two of the nation’s largest teachers unions, the United Federation of Teachers and National Educators Association, have endorsed the march and are mobilizing their teachers and students.
Young people in NYC and around the country will be meeting the day before the People’s Climate March at a Youth Convergence, to train, strategize and connect around youth organizing for climate justice
On the eve of the March, there will be an Inter-Faith Youth Service with the Unitarian Universalist Youth Association and Tim DeChristopher, famed young climate activist who served 2-years in prison for an act of civil disobedience.

Young Organizers Share What the People’s Climate March Means to Them:

“Students are coming out in droves for this march because we recognize that it is our generation that will face the consequences of climate change. In speaking with students from CUNY, SUNY and others across the state, we are excited to join communities here in NY, along with people from across the globe, to make clear that we are ready for a clean energy future.”
-Aileen Sheil, NYPIRG’s chairperson and a Queens College student.

“The Peoples Climate March is important because climate change is already destroying people’s lives and now is the time to address it, we can’t wait, we have to do something now!”
-Daisy Trelles, a 16-year old organizer with UPROSE, Brooklyn’s oldest Latino organization

“Students and youth have always been at the vanguard of social movements, and what I’m looking forward to at the People’s Climate March is the intersection of movements. Labor, faith, students, race, class, LGBTQ movements are all coming together in a fantastic show of solidarity, art, culture and power. A movement of movements rooted in shared vision.”
-Varshini Prakash is a senior at UMass Amherst majoring in Environmental Science and Political Science. She’s a board member of the Responsible Endowments Coalition and member of the coordinating team of the Divestment Student Network.

“For our generation, climate change is so much more than a political issue. This is about our future and the kind of world we will inherit, so when world leaders fail to act we take it personally. It is clear we can no longer wait for politicians to solve the problem for us, we must become the leaders we have been waiting for.”
-Xiuhtezcatl Martinez is a 14-year-old indigenous activist from the group Earth Guardians.

“Hurricane Sandy impacted my community in the Rockaways, as well as other parts of New York and New Jersey. Climate Change is a big problem in the time we live in, and action needs to be taken to stop this injustice on people and our environment. This part of New York is still recovering from the devastation of a climate change storm. We the people need to take a stand and speak and fight for justice, for people, our environment, and our earth. We need to take action and we need power; we need Change.”
-Albert Carcaterra, grew up in Rockaway Park, New York and organized in his community with Occupy Sandy after the Hurricane.

“Divestment organizers at American University are working incredibly hard to bring as many students as possible to the People’s Climate March. We know that PCM goes beyond one march and one afternoon–it is an opportunity for us to bring new students into our campaign and to build relationships with schools in our area. It will give us momentum and inspiration and make our divestment campaign stronger than ever.”
-Deirdre Shelly is a senior at American University in Washington, DC. She is a leader of the divestment campaign on her campus and is coordinating student recruitment for schools in DC and Maryland.

“I am planning to attend the People’s Climate March because I think it is important to stand in solidarity with others around major issues that impact people all over. The environment affects everyone in every place and I hope this march will bring to light the power that we have as people to make change.”
-Deanna Nagle is a junior at Penn State studying Labor Studies and Employee Relations. As a Regional Organizer for United Students Against Sweatshop she works around labor issues that affect people across the world.

“In Minnesota, the People’s Climate March is bringing together hundreds of youth and students from all over the state. A march is a chance for many people to come together as one, so we’re really using this as an opportunity to build bridges between our communities and forge lasting connections. Going forward we want to use these connections to better support each other’s work in tar sands, divestment, and more. We’ll stand together, empowered and united, as we grow an inclusive and intersectional movement.”
-Brent Murcia is a junior environmental studies student at Carleton College in Minnesota. He is working on campaigns for divestment and waste reduction on campus and also on organizing Minnesota students for the People’s Climate March.

Please Help and Donate to the Most Valuable Kids
Next Post: OnMedia NYC 2014