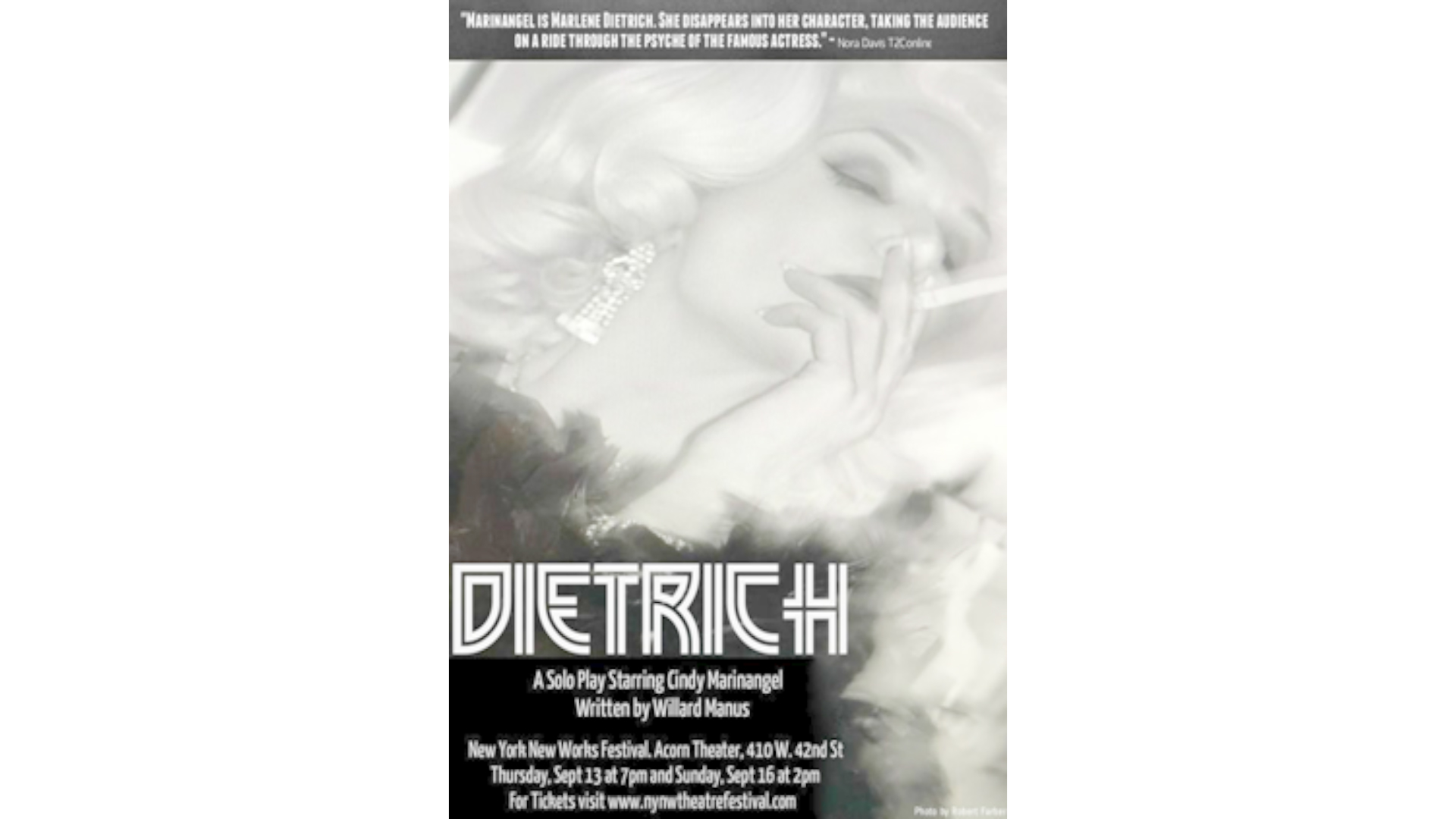 Written by Willard Manus, directed by Michael V. Doane, accompanied by pianist Russell Daisey
and starring Cindy Marinangel, “Dietrich” is a based on a true story. Set in May 1960, the play
takes place when the actress returned to the Berlin stage for the first time since fleeing the
Hitler regime in the 1930’s. Inside her dressing room at the Tatiana Palast Theater, Dietrich
weighs whether to go through with the live performance despite threats on her life by Nazi
sympathizers who resented her for having spent much of World War II entertaining American
soldiers on the front lines. To them, Dietrich is a turncoat; a traitor who deserves to be shot and
killed on stage.

“Dietrich” (formerly known as “Marlene”) celebrated its world premiere at the Brickhouse
Theatre in Los Angeles, debuted in New York at the Hudson Guild Theatre as part of the New
York Theatre Festival’s annual Winterfest and had a successful showing at The Triad, an OffBroadway
theatre in Manhattan.
The play was chosen for the New York New Works Festival among hundreds of plays submitted
for consideration. Every submission was reviewed by a panel of Broadway producers, many
who have won Tony and Emmy awards for their work.
Visit www.dietrichplay.com for more information.
Cindy Marinangel is a Lifetime Member of The Actors Studio and a graduate of the Chicago
Second City Conservatory. Marinangel was recently seen in “Beverly Hills Christmas,” a holiday
film starring actor Dean Cain that airs seasonally on UPtv. Visit www.cindymarinangel.com for
more information.

Willard Manus is a playwright, journalist and novelist. He is a member of the
playwrights/director’s unit of The Actors Studio. His most recent plays are “Joe and Marilyn: A
Love Story,” “Frank and Ava” (now a motion picture) and “Who Killed Comrade Rabbit?”
Michael V. Doane is a singer, writer, composer, producer and director having performed in
various concert venues, regional theatres, national and European tours, and productions on and
off Broadway. For six years, Michael served as the artistic director for the Flatiron Theatre
Company (NYC) where he directed critically acclaimed revivals.
Russell Daisey is an internationally acclaimed pianist, singer and songwriter. He’s performed at
The First Hiroshima International Peace Summit (onstage with the Dalai Lama); the Palais des
Congres in Paris; before President Bill Clinton and former Secretary of State Hillary Clinton; and
Nobel Peace Prize Laureates Ellie Wiesel, Archbishop Desmond Tutu and Betty Williams.