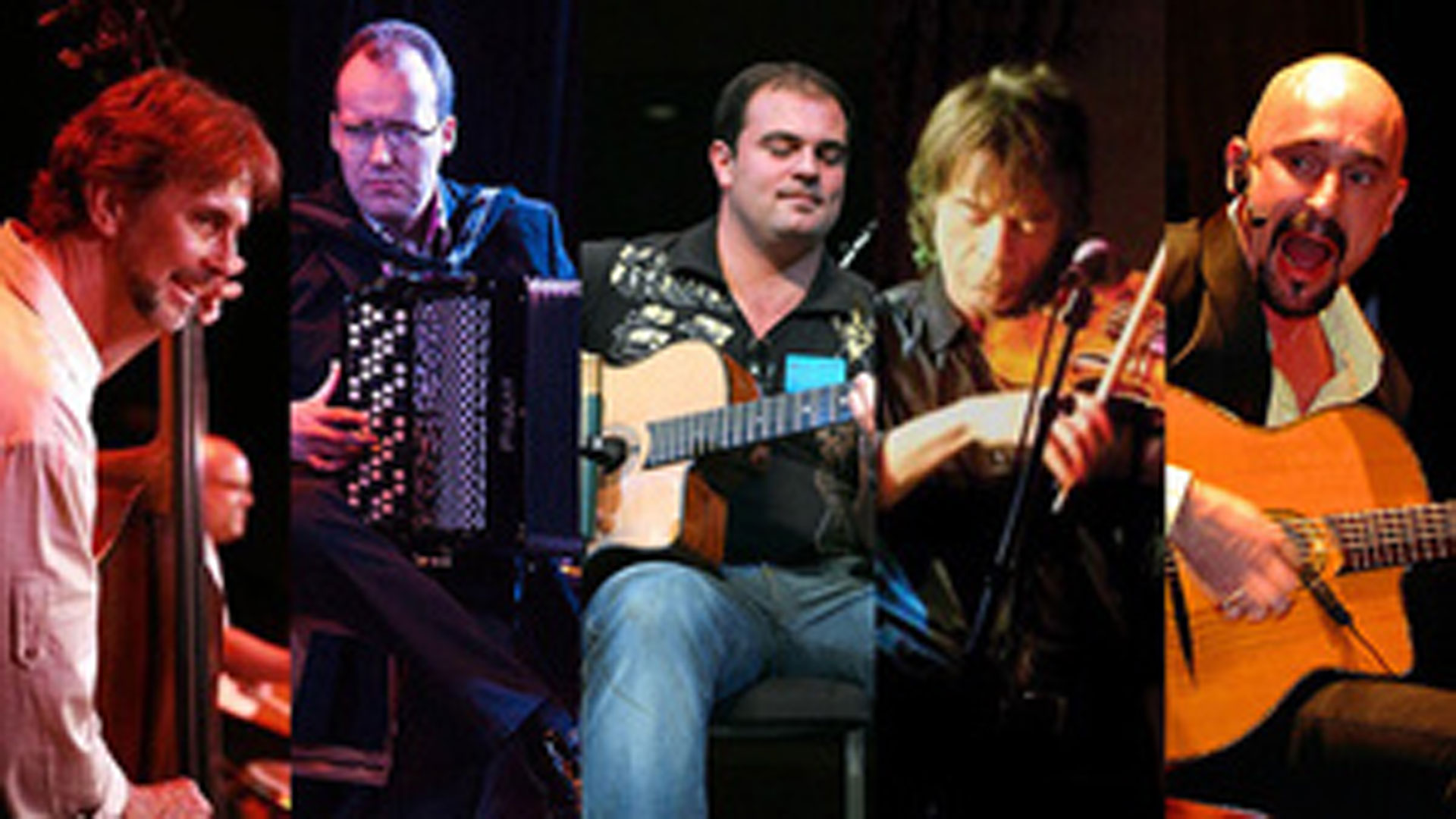 Peter Beets/Piano from Holland and more…

Imagine a stage filled with contemporary  Django Reinhardt descendants and you’ll get a sense that the collective talent pool on the bandstand is larger than the Arc deTriomphe!”

This summer, August 5-10, The Allstars will be headed  by Samson Schmitt, out on his own, a star in his own right .  For years, he grew up on the Birdland stage, playing side by side with his legendary father gypsy king Dorado Schmitt.

Also featured at will be  virtuoso violinist Pierre Blanchard “who captures the true romantic fire of Grappelli” and Ludovic Beier on Accordion and Accordina who “was breathtaking and beautiful”, says Will Friedwald of the Wall Street Journal.  On rhythm guitar this summer is DouDou Cuillerier who also brings the audience to its feet with his scat singing.  Of the Special Guest jazz pianist Peter Beets, Downbeat says “Straight ahead excellence !  Olli Soikkelii is one of the new young guitar greats.  Brian Torff holds it all together on bass.

Dorado Schmitt will be back in November with all ‘3’ sons, Amati, Samson, and Bronson.  Pierre Blanchard and Ludovic Beier return with Francko Mehrstein on Rhythm Guitar and Xavier Nikq on Bass. Guests TBA.

The Festival, started in 2000, finding there was huge interest in Django’s style of HOT JAZZ.  It has gone on to be a highly anticipated event twice a year, now in its 15th year,  accompanied by major tours – see all info below. .  The AllStar bands emerged out of the Festival which is Produced by Pat Philips & Ettore Stratta.

Django’s inspiration was Louis Armstrong and Duke Ellington–sheer virtuosity with exuberant showmanship leaving a crowd breathless as it is with The Django Festival AllStars.  Leonardo DiCaprio has become one of their biggest fans as is George Benson, ..every great jazz guitarist was inspired by Django, Keith Richards B.B.King, to name a few.

The Django Festival AllStars carry on the legacy of the brilliant gypsy guitarist Django Reinhardt who was part of one of the most famous musical partnerships in European history with virtuoso Jazz violinist Stephane Grappelli, together they formed the Hot Club Quintette of France.

The AllStars, mostly from France,  bring the audience to their feet with lightning-fast guitar fingerwork on standards such as “Minor Swing” and  also put the crowd in a romantic mood with gorgeous melodies, hit songs of the past such as Django’s “Nuages”. The program includes many new original compositions that take the music beyond.

Django’s inspiration was Louis Armstrong and Duke Ellington–sheer virtuosity with exuberant showmanship leaving a crowd breathless as it is with The Django Festival Allstars.  Leonardo DiCaprio has become one of the biggest fans as is George Benson, Woody Allen…every great jazz guitarist was inspired by Django, Keith Richards B.B.King, to name a few.

“Expect Buoyant rhythm, blinding technique, solid entertainment” says Nate Chinen of the NY Times.
DJANGO held it all together like a magnet, as does his descendants, The Django Festival AllStars!

Come to Birdland and celebrate.  The Django Reinhardt NY Festival is about ‘joy’!  We can always use a dose of that!

The Django Festival is about talent and joy!

Many thanks to the Sponsors:

From June 26 through 28, Air France is presenting a unique exhibition at Center 548 (22nd Street & 11th Avenue in Manhattan), which will be open to the public between 11 a.m. and 5 p.m.
You will be able to experience the new Air France seats, enjoy interactive activities for kids and adults.

AND you could even win Air France tickets to Paris!

Link copy: All about the Air France Exhibition