Evening in Remembrance of Alice Herz-Sommer on March 20, 2014

You are here: Home / Communities / Europe / German / Evening in Remembrance of Alice Herz-Sommer on March 20, 2014 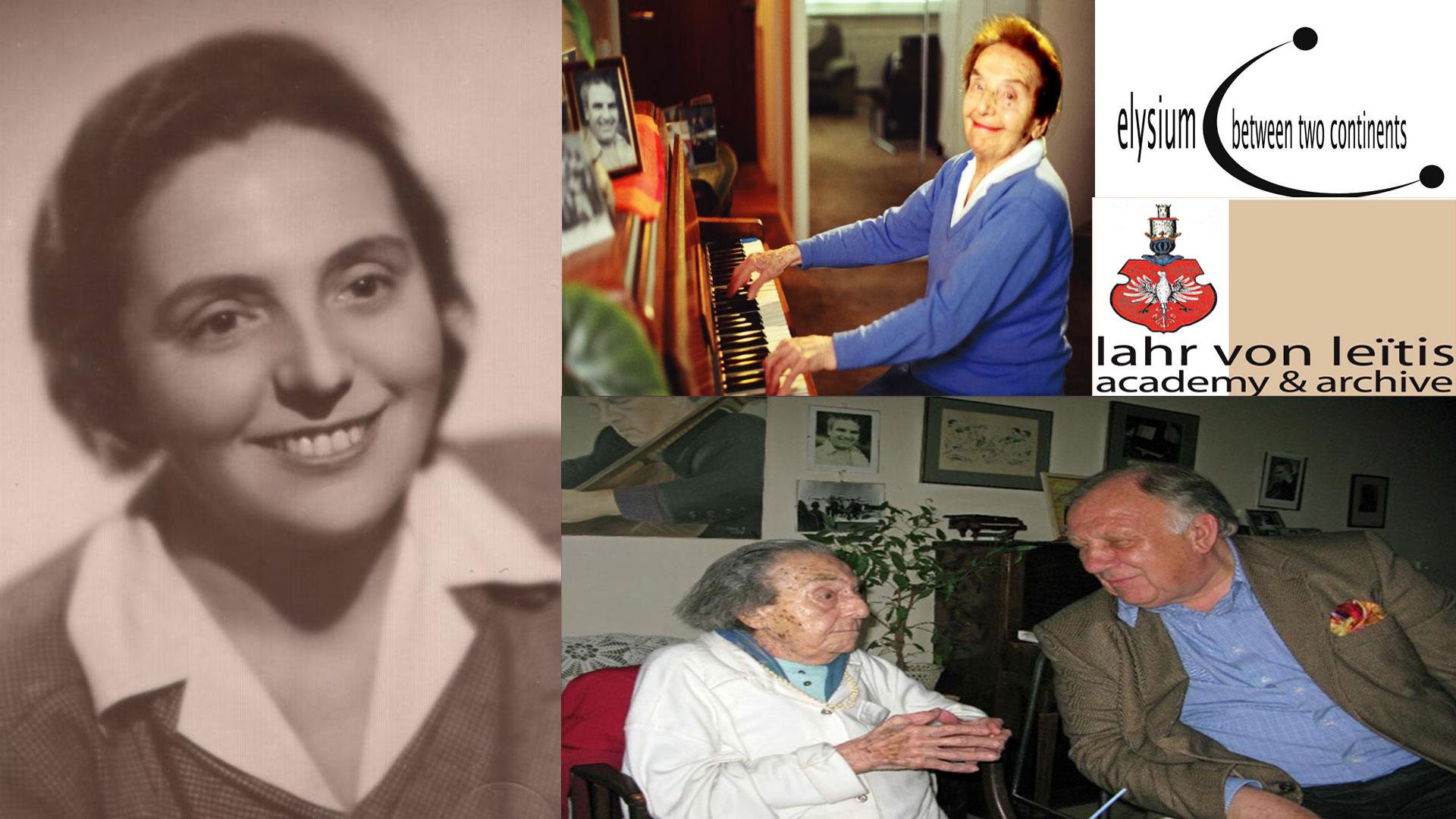 under the auspices of
Martin Dvorák
Consul General of the Czech Republic
cordially invite you to an evening in remembrance of
ALICE HERZ-SOMMER (1903 – 2014)
Pianist
Survivor of Terezin
Honorary Artistic Director of Elysium – between two continents
on Thursday, March 20, 2014 at 7.00 pm
at the Consulate General of the Czech Republic
321 East 73rd Street (between First & Second Avenues)
in New York City
Screening of the film From Hell to Paradise by Michael Teutsch
documenting the life of Alice Herz-Sommer
followed by a reception
Due to limited seating reservations are required
Please R.S.V.P. by March 15
phone: 212-744 4875
e-mail: elysiumbtc@aol.com
or gvl@lahrvonleitisacademy.eu

Alice Herz-Sommer served for many years as advisor and Honorary Artistic Director of Elysium – between two continents. The German daily “Die Welt” called her “an optimist bigger than life.” She wasborn on November 26, 1903 in Prague, then part of the Austro-Hungarian empire. Her mother was an accomplished pianist and a childhood friend of Gustav Mahler. Her parents were close to a number of well-known writers, scientists and musicians. Franz Kafka was a regular guest in their house. Alice’s older sister married Kafka’s best friend, the philosopher Felix Weltsch.

Early on it became clear that Alice, too, was musically very gifted and at sixteen she was the youngest member of the masterclass at Prague’s German Musical Academy. She soon became one of the best-known pianists in the city, and in the early 1930s she gave recitals in Warsaw, Vienna, Brussels; Copenhagen and other European cities.

In 1931 she married Leopold Sommer. In 1937 their son Stephan (later known as Raphael) was born. But little by little her comfortable, bourgeois world began to crumble around her. When the German Army occupied Prague in March of 1939, the persecution of Jewish citizens systematically began. Alice Herz-Sommer was not any more allowed to publicly perform or to give piano lessons to non-Jewish citizens. Then, in 1942 Alice’s mother was deported. Desperately unhappy, she resolved to learn Chopin’s 24 Études – the most technically demanding piano pieces she knew – and the complex but beautiful music saved her sanity.

In 1943, she, too – together with her husband and their six-year-old son – was deported to the concentration camp Theresienstadt. But even there music was her salvation. In the course of more than a hundred concerts she gave her fellow-prisoners strength and hope in a world of hunger, pain and death. At the same time she struggled to create a happy childhood for her beloved only son in the midst of atrocity and barbarism. Of 15,000 children sent to the camp, Stephan was one of the 130 who survived. Alice’s husband, Leopold Sommer, was deported from Theresienstadt to Auschwitz at the end of September 1944. Shortly before the liberation he died in Dachau of typhus.

After the end of World War II, Alice Herz-Sommer and her son Stephan returned to Prague. But the political climate was dominated by repression, fear and distrust. Anti-Semitism still was widespread. Therefore, Alice Herz-Sommer and her son decided to emigrate to Israel in 1947. There, she taught at the Conservatory in Jerusalem for more than 25 years.

In 1986 Alice Herz-Sommer moved to London to be close to her son, who in the meantime had become a well-known cellist, and his family. Suddenly and unexpectedly, Raphael Sommer died in 2001 during a concert tour in Israel. Almost until the very end, Alice Herz-Sommer played the piano every day for a few hours. She passed away on February 23, 2014.

The Munich-based filmmaker Michael Teutsch has documented Alice Herz-Sommer’s life in an impressive film “From Hell to Paradise or Chopin saved me” that has been highly acclaimed at international festivals.

Artistic dialogue, creative exchange and friendship between the United States of America

Fighting against discrimination, racism and anti-Semitism by means of art.

Since its founding on October 11, 1983, Elysium has presented more than 400 programs

(theater and opera productions, concerts, readings, exhibitions, and lectures) in more than

80 cities worldwide. Over the years, Elysium has established itself as a vital force at the

intersection of American and European cultures.

was founded in 1995 by Michael Lahr and Gregorij H. von Leitis to foster the academic

dialogue between the US and Europe by means of lectures, seminars, workshops and

Art and education without borders. Education and knowledge as efficient tools to fight

against ignorance, discrimination and hatred.

Familiarizing the young generation with the treasures of exiled art, to help them create a

meaningful future that incorporates the lessons learned from history.

Previous Post: « USCIS New York Offers Assistance to Those Who Lost Immigration Documents in Harlem Explosion
Next Post: Final Month to Submit Your Art, Essay or Poetry for Our 2014 Invitational