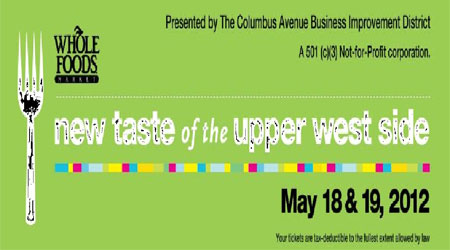 Back and Better Than Ever with a Fresh Line-Up

New York’s Legendary Gael Greene to be Honored at

Best of the West

Upper West Side. We are pleased again to be able to give back to our neighborhood, extending our reach on a more personal level made possible by the continued success and relationships of the New Taste events” says

For three nights, the Whole Foods Market New Taste of the Upper West Side will showcase top chefs and restaurants for a spectacular line-up of festivities. Kicking things off on Wednesday, May 16th, is the new and elegant, Vegetables at Dovetail: An inspired five-course vegetarian tasting dinner by an all-star group of chefs, led by John Fraser, Dovetail; Missy Robbins, A Voce: Ed Brown, Ed’s Chowder House; Harold Dieterle, Perilla and Christina Tosi, Momofuku Milk Bar. All net proceeds from this event will benefit the Greenhouse Classroom, a project at the I.S. 44 School, where the New Taste of the Upper West Side is held. The Greenhouse Classroom will educate students about science, while growing organic hydroponic vegetables. Chef John Fraser and Dovetail have a relationship with the project, helping maintain the greenhouse and using its produce at the restaurant.

Saturday night, May 19th will wrap up the weekend with the Best of the West and the VIP Reception presented by First Republic Bank, honoring New York’s legendary food critic, humanitarian and culinary pioneer Gael Greene. The star-studded evening will feature such world renowned chefs as Daniel Boulud, Michael Lomonaco, Jacques Torres, Jean-Georges Vongerichten, alongside 40 more celebrated talents from the

Upper West Side, creating signature dishes and spectacular bites. Adding even more excitement to the “high-spirited” night will be The Modern Mixologist, Tony Abou-Ganim, serving up his signature cocktails. Net proceeds for the event will benefit the Columbus Avenue BID’s Streetscape Beautification Project, a greening project expected to begin Phase One between West 76th and West 77th this summer; Citymeals-on-Wheels founded by Gael Greene, an organization that provides New York’s elderly with nutritious meals and human companionship, and the I.S.44 Greenhouse Classroom project.

The exciting event roster will include:

Under the Grand Tent on Columbus Avenue between W 76th and W 77th Street. Hosted by Travel Channel’s duo Adam Richman and Andrew Zimmern, this high-energy evening will feature over 35 chefs showcasing unique bites inspired by old favorites with cocktails, wine and spirits by Southern Food and Wine.

Best of the West:

Under the Grand Tent on Columbus Avenue between W 76th  and W 77th  Street.Celebrating the Upper West

Side’s most extraordinary chefs and restaurants, while honoring gourmet great Gael Greene -the Best of the West is a culinary lover’s dream. With more than 40 of New York’s most popular chefs, wine and spirits, and live music; this is an event not to miss. A portion of the proceeds benefit Citymeals-on-Wheels. Be sure to order VIP tickets if you’d like to mingle with some of the culinary stars.

History, Theodore Roosevelt Park, The New-York Historical Society and the Rose Center for Earth and Space.