Franco Moschetti on, When Yellow Were The Stars On Earth playing in Manhattan: January 2, 2014

You are here: Home / Arts & Leisure / Franco Moschetti on, When Yellow Were The Stars On Earth playing in Manhattan: January 2, 2014 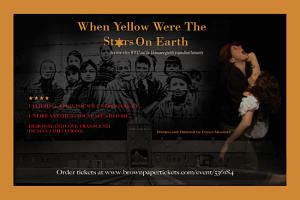 Franco Moschetti, Playwright, Director and Actor on his play returning to Manhattan theater in January, 2014:

When Yellow Were The Stars On Earth
( YellowStars.org )

For those of you who are attending,
purchase tickets at:
YellowStars.org/releases
Then – enter “888” after your first name
to recieve $3 back at the door!
(Just state your name at the door and request your refund)

A new WWII drama about the Holocaust by Franco Moschetti. One night in Berlin, 1943, during an SS raid, a German Cabaret singer opens her door to save a Jewish Resistance fighter. As the hours unfold, destiny winds their lives more tightly together until there is no turning back. When Yellow Were the Stars on Earth tells a story of two rarely written about realities: Jewish female fighters and Germans who died refusing to be part of Nazi machinery. Amidst the atrocities of WWII, these women transcend enemy lines and, in their final moments, make an ultimate sacrifice for love.

The Cycles Of Change is revisiting this remarkable play as an example of how American cycles have re-entered a nostalgia period that will last well into the next decade. As there is a time for looking forward and a time for looking back, the internal rhythms of the United States has brought us back into a restrospective period that will only increase as this decade progresses. We have renewed our interest in the past, and this play is on the leading edge of this perspective. Listen in for a view of us as we view ourselves in recent history.

“The Cycles of Change” Radio Show
Thursdays: 8pm Eastern, 5pm Pacific
Call in to speak with the host (347) 884-9593
BlogTalkRadio.com/cycles
Listen Live or visit us for the audio archive afterward