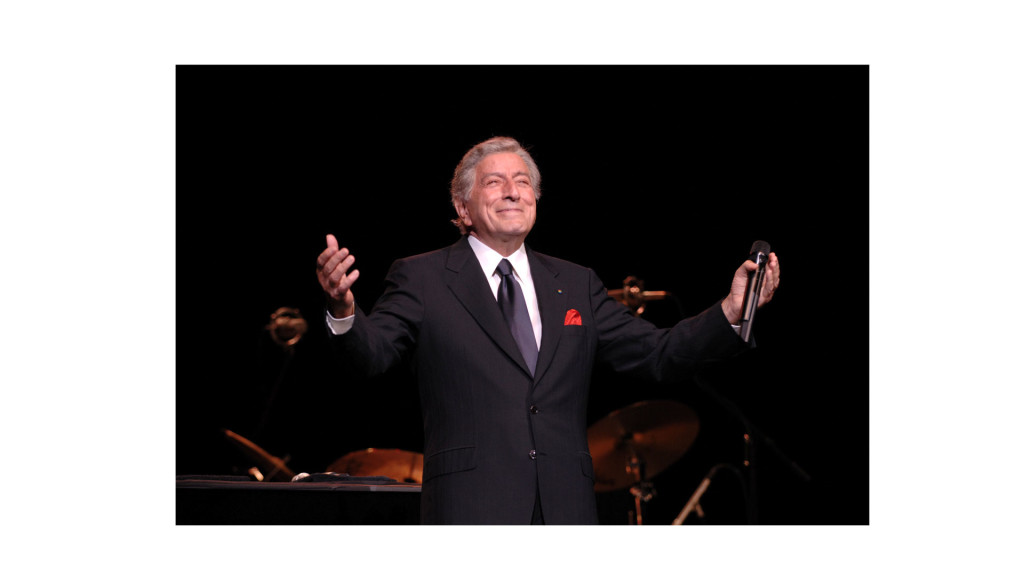 (New York, NY) June 7, 2016 – Legendary entertainer Tony Bennett will be honored by the Friars Club in celebration of his storied career that has spanned 7 decades. The awards gala will be held on Monday, June 20, 2016 in New York City. The award-winning performer, who has been a Friar for more than 50 years, will receive the Club’s most prestigious accolade: The Entertainment Icon Award.

The Award pays tribute to an Individual whose accomplishments transcend the entertainment industry by positively redefining the very culture we live in. Bennett joins superstars Tom Cruise, Robert De Niro, Douglas Fairbanks, Cary Grant and Frank Sinatra as the sixth Entertainment Icon Award recipient since the Friars launched in 1904.

One of the most respected talents in entertainment, no one else in popular American music has recorded for so long and at such a high level of excellence as Tony Bennett. Bennett has received 18 Grammy Awards, including the Grammy Lifetime Achievement Award. He is also one of a handful of artists to have new albums charting in the 50s, 60s, 70s, 80s, 90s and now the first two decades of the 21st century. His contribution to the American Songbook has included such chart toppers as Rags to Riches, Who Can I Turn To (WhenNobody Needs Me) and his signature, I Left My Heart In San Francisco. He is also an accomplished painter and author.

“I have enjoyed being associated with the Friars Club over the years and it is an absolute thrill to be receiving the Icon Award this year. I have so many wonderful memories of events I attended at the Friars and I look forward to the evening in June, “ says Tony Bennett.

Throughout his career, Bennett has been a driving force behind several humanitarian causes. He has raised millions of dollars for the Juvenile Diabetes

Foundation, which established a research fund in his name. His original paintings each year grace the cover of the American Cancer Society’s annual holiday greeting cards with proceeds earmarked for cancer research. Active in environmental concerns and social justice, he marched with Dr. Martin Luther King in the historical Selma to Montgomery Civil Rights movement and the Martin Luther King Center in Atlanta bestowed upon him their Salute to Greatness Award for his efforts in fighting racial discrimination. With his wife Susan, they established EXPLORING THE ARTS, to support arts education in public high schools and founded with the NYC Department of Education, Frank Sinatra School of the Arts in Tony’s hometown of Astoria, Queens. EXPLORING THE ARTS supports and partners with 23 public art high schools in New York City and Los Angeles.

The Friars Icon Award recognizes Bennett’s achievements, both professionally and philanthropically, as Friars Club Abbot Jerry Lewis notes, “The Friars are proud to acknowledge all that Tony Bennett has accomplished throughout his incredibly successful career. And we are thrilled that 50 of those years have been as a member of our legendary fraternal family. His invaluable contributions to entertainment and the arts, along with his tireless humanitarian efforts, have earned him our coveted Icon Award.”

Lewis added, “As if his stellar career wasn’t enough, that fact that it was our own Friar Bob Hope who suggested he change his name from Anthony Dominick Benedetto to Tony Bennett, means that it was only a matter of time that we’d find a way to unite the two Friar Icons for all time.”

About the Friars Club

The Friars Club was founded in 1904 as a meeting place for entertainers and over the years has achieved legendary status. Its membership includes the likes of Jimmy Fallon, Jon Stewart, Brian Williams, Barbra Streisand, Jerry Seinfeld, Rosario Dawson, Tom Cruise, Les Moonves, Whitney Cummings, Samuel L. Jackson and Robert De Niro. The Friars Club “Monastery” is headquartered in Midtown Manhattan in a classic townhouse and is a haven for entertainers young and old.

In 2020 we will take our event to 193 countries and other locations to create the largest world gathering & broadcast to share Peace, … END_OF_DOCUMENT_TOKEN_TO_BE_REPLACED