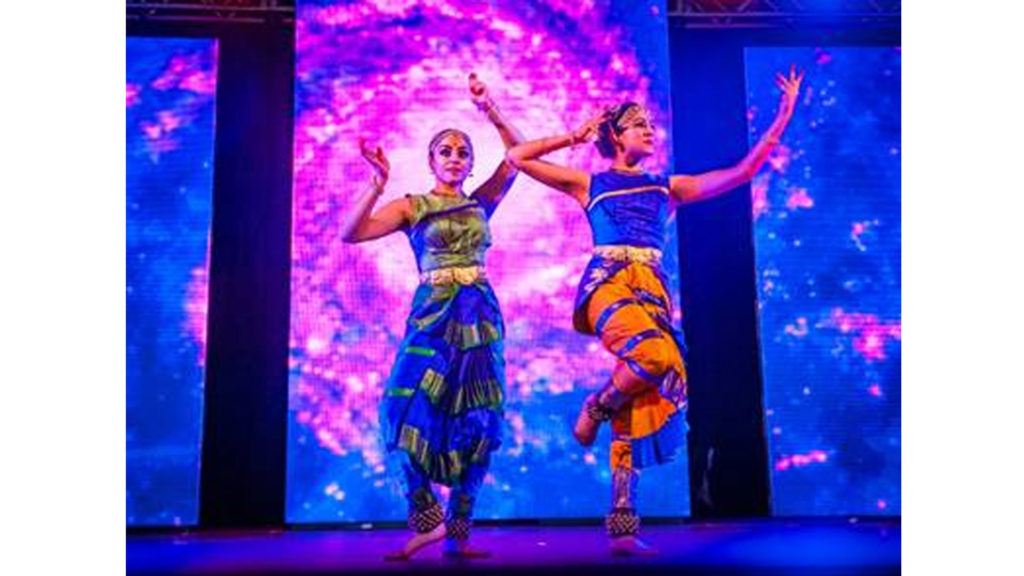 Bridgefest 2017, now in its second year under the auspices of Newport Festivals Foundation, Inc. presented A Bridge Together, a special concert and Newport Jazz Festival® “extra” that connected Jazz, African Beats and Indian Carnatic music, on Thursday, August 3, at 6:30 pm on the Quad Stage at Fort Adams State Park. Admission was free.

This pre-Newport Jazz Festival event showcased the multicultural connections between music and movement. The two-part concert featured dance segments by 17-year old twins, Riya and Sara Kapoor, accompanied by a Carnatic music orchestra featuring musicians from India. Guru Swati Bhise was the Conductor and Choreographer for the music and orchestra arrangement for this dance segment. The jazz quartet was led by award-winning guitarist Rez Abbasi and West African compositions, directed by the noted West African choreographer and dancer, Maguette Camara, rounded out the evening.

Fusing Indian, African and American dance and music while demonstrating the shared cultural roots that these traditions have in common, A Bridge Together raised the question: “Are we so different after all?” The answer was up to the audience after seeing and hearing this upbeat, visually exciting melding of cultures.

Part I was an exploration of music from West Africa, India and the US. To start, there was “The First Beat,” blending Indian Classical and traditional West African genres with instruments such as the mridangam and tabla played interactively with the West African djembe. Western musical traditions eventually got a turn with familiar sounds from guitar and saxophone. The result was a harmonious, unexpected cohesion, which made the point that together we can choose to thrive.

Part II introduced the expressive, athletic Kapoor sisters, whose intense study of Bharatanatyam has continued for more than a decade in New York City. The Indian-American sisters first appeared on stage at age 15 at their debut event at Jazz at Lincoln Center. Newport Festivals Foundation CEO/founder George Wein was in the audience when Riya and Sara made their debut and was determined to bring some of the magic he saw on stage to Newport.

“These young women are tremendous,” said Wein. “The dances are very intricate and beautiful, but what I loved is how they brought jazz into these very traditional art forms. They’ve modernized the dances in a wonderful way while adding a delightfully different perspective to jazz music.”

The first element, “The Invocation,” amazed audiences with heavy percussion created by multiple drums, while dancers clad in traditional costumes in shades of saffron and eggplant danced in the Bharatanatyam style, a challenging series of steps performed in accordance with ancient rules. Here every muscle, every facial expression, every bell trilling from the dancers’ ankles, became part of the performance. “The First Foils” and “The Ten Apostles of Peace” revved up the sound and excitement with a full Eastern orchestra, vocal chanting and jazzy beats. The songs and dances celebrated Shiva, the Hindu god known as the “cosmic dancer.” The evening reached a crescendo with “Bridge Together,” which focused on the dancers with slow, easy movements to begin and progressively rose to leaps, pirouettes and bold percussive beats. The choreography was enhanced with improvisation by the jazz artists and African drummers.

A Bridge Together, like many of the Newport Festivals’ events, aimed to educate and entertain audiences by introducing them to cultures from distant places and celebrating what unites us all here in Newport: the love of music and movement, the inspiration it provides and sharing the experience.

A Bridge Together capped off Bridgefest, which ran from July 31 to August 3, between the iconic Newport Folk and Jazz Festivals. Bridgefest was founded in 2009 by the Arts and Cultural Alliance of Newport County to celebrate Newport’s musical community. Other Bridgefest events will be announced in the coming weeks.

Newport Festivals Foundation was founded by George Wein in 2010 to build and continue the legacies of the famed Newport Jazz Festival® and Newport Folk Festival®. Under the auspices of the Foundation, the Festivals present performers who respect and honor jazz and folk music traditions, and at the same time reflect the changes in today’s musical trends. The Educational Initiatives of the Foundation aim to foster opportunity, inspire through exposure and facilitate the collection of resources needed for musicians, emerging and established, to celebrate and innovate. For more information, please visit www.newportfestivalsfoundation.org.