You are here: Home / Good News To Go / j-CATION: Sakura 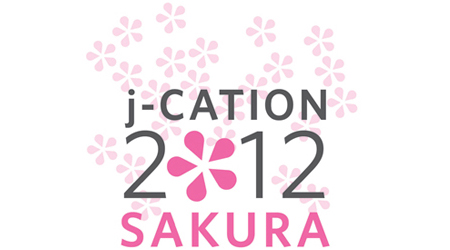 Japan Society’s annual all-day culture festival j-CATION traditionally promises “a trip to Japan without ever leaving New York City”. But the 2012 installment themed around sakura—or cherry blossoms, a spring season delight in Japan— promises more: one lucky person will walk away with an actual trip to Japan.

As the concluding event in the Sakura – Spring Renews, Beauty Blooms programming series commemorating the 100th anniversary of Japan’s gift of cherry trees to Washington, DC and New York City’s Upper West Side, this year’s j-CATION: Sakura transports visitors to a cherry blossom-filled haven of workshops, crafts and mini language lessons; a classic film screening; a Japanese-style game show with a grand prize of a round trip ticket to Japan; live music concerts; DJ party; stunning design art from the exhibition Deco Japan; and a hana-mi (cherry blossom viewing) lounge with seasonally appropriate drinks and snacks for purchase.

Taking place Saturday, April 14 from 11:00 am-11:00 pm, j-CATION: Sakura kicks off with an outdoor taiko drum salute. Throughout the day, Japan Society’s 262-seat auditorium sets the stage for several feature presentations. Participants can try their luck with You’re on Standby! A Japanese Game Show, a spectacular travel quiz contest with the prize of a roundtrip ticket courtesy of United Airlines. Later j-CATIONers are transported to the vivid land of geishas, samurai and cherry blossoms in the early afternoon movie screening of Killing in Yoshiwara A.K.A. Heroes of the Red-Light District.

The evening explodes into a rocking rave with breakout artist Alex York, whose Japanese song “Change” (written for Tohoku earthquake relief efforts) received over 100,000 hits on YouTube in its first few weeks of release and continues to climb. The beloved Japanese girl band, The Suzan, whose “Come Come” was selected by an NFL Verizon TV campaign for the 2011 NFL season, returns following their debut at Japan Society’s 2011 CONCERT FOR JAPAN.

Whether staying all-day or just for one event, admission is $10/$5 Japan Society members and children under 12/FREE for children 2 years and under.  Main stage presentations and workshops have a limited capacity and are on a first-come, first-served basis. Tickets may be purchased at the door the day of the event only from 11:00 am-10:00 pm (no advance ticket purchase is available.) More at www.japansociety.org/j-CATION.

Decoration Exploration
11:00 am–5:00 pm
Showcasing the spectacular craftsmanship and sophisticated design associated with both Japan and Art Deco style, Japan Society’s Deco Japan: Shaping Art & Culture, 1920-1945 is America’s first exhibition to explore a little-known brand of pre-WWII modernism born of competitive ingenuity and vivacious cosmopolitanism. j-CATION guests roaming the gallery can compete in “Decoration Exploration” following cryptic questions to capture the answers. A seasonal surprise will be awarded to everyone who completes the search. The contest ends at 5:00 pm, but gallery hours are extended to 8:00 pm for j-CATION. Deco Japan is open through June 10.

Hana-mi Lounge
11:00 am–11:00 pm
Hana-mi is the Japanese word for “cherry blossom-viewing.” Guests can grab a drink and transport themselves to a public park in Japan.  Live entertainment in the lounge includes traditional Japanese instrumentalists, participatory karaoke and a DJ jamming the night away. Throughout the day guests can view a live-feed of the featured theater events.  Seasonally inspired beverages (such as beer, sake, plum wine, cold tea, juices and sodas) and snacks from Japan will be available for purchase. In the foyer, vendors will provide food and snacks for purchase, and on the 2nd Floor, wagashi (Japanese sweets) will be on display, with items for sample and sale.

Wall*Flowers Installation
11:00 am–8:00 pm
Guests can help a magnificent cherry tree reach peak bloom in Japan Society’s sky room by crafting an origami cherry blossom with a few simple folds and cuts. After writing a wish, haiku or message to Japan, the bloom will be added to the growing sakura tree on the wall.

Origami in Full Bloom
11:00 am–6:00 pm
Learn how to transform ordinary paper into beautiful springtime images, including a variety of flowers.

Memory: Things We Should Never Forget
11:00 am – 11:00 pm
Visitors can pay tribute to those affected by Japan’s March 11, 2011 earthquake and tsunami. This special exhibition in the A-Level is comprised of 47 photos taken in the Tohoku by the photo department of Japan’s largest business and economy newspaper the Nikkei. “Then and now” pairings, portraits and landscapes poignantly illustrate the human tragedy as well as the optimism and resilience of local people as they rebuild. A video of the work of Japan Earthquake Relief Fund grant recipients runs in tandem. Open through May 27.

Kamishibai Storytelling
11:20am–1:40 pm
This traditional storytelling technique transport children to a springtime world filled with cherry blossoms.  Recommended for children ages 3-10 accompanied by an adult.

You’re on Standby! A Japanese Game Show
1:00–2:00 pm
One lucky j-CATIONer will walk away with a ticket to Japan during this live on-stage game show inspired by the zany world of Japanese TV. Winning the ticket won’t be easy—contestants submit to grueling mental and physical challenges that test their stamina (and amuse everyone else). Hosted by Kenji America, You’re on Standby! is an exciting, surprise-filled hour of fun involving the entire audience. Appropriate for ages 18 and up.

Yozakura Nights
8:00–10:00 pm – Concert with Alex York and The Suzan
10:00–11:00 pm – DJ party
Yozakura is the word for evening cherry blossoms, and in the final festival events, j-CATIONers can rock the night away to the beats of NYC-born and raised acclaimed pop-rocker Alex York, singing in Japanese and English, and New York City’s beloved riot-grrl, garage punk band from Tokyo, The Suzan, before moving to the Hana-mi Lounge to finish the evening with the mixing melodies of DJ Aki.

Hana + Haiku
**ONLINE IN ADVANCE; Contest Ends April 9
Aspiring poets and writers around the world are invited to send in their sakura-infused haiku to haiku@japansociety.org. Selected submissions will be shown on the big screen at j-CATION, and may be highlighted through the Society’s social media outlets. The best haiku receives a springtime prize.

Japan Society launched j-CATION in 2010 to give a glimpse of Japan Society’s perennial garden of programming in film, performance, exhibitions, workshops, talks, language lessons, family activities, food, fun and more. Having drawn nearly 3,000 visitors at the initial “Taste Japan” j-CATION, 2011’s festival was transformed into a benefit CONCERT FOR JAPAN—a full day of music performances with 100% of all proceeds (over $88,000) going to Japan Society’s Japan Earthquake Relief Fund.

Founded in 1907, Japan Society is an American nonprofit committed to deepening mutual understanding between the United States and Japan in a global context. Now in its second century, the Society serves audiences across the United States and abroad through innovative programs in arts and culture, public policy, business, language, and education.

Japan Society is located at 333 East 47th Street between First and Second avenues (accessible by the 4/5/6 and 7 subway at Grand Central or the E and V subway at Lexington Avenue). For more information, visit www.japansociety.org.