Ice Bucket Challenge: The joys of being a child!!!!!!!

You are here: Home / Communities / African / Ice Bucket Challenge: The joys of being a child!!!!!!! 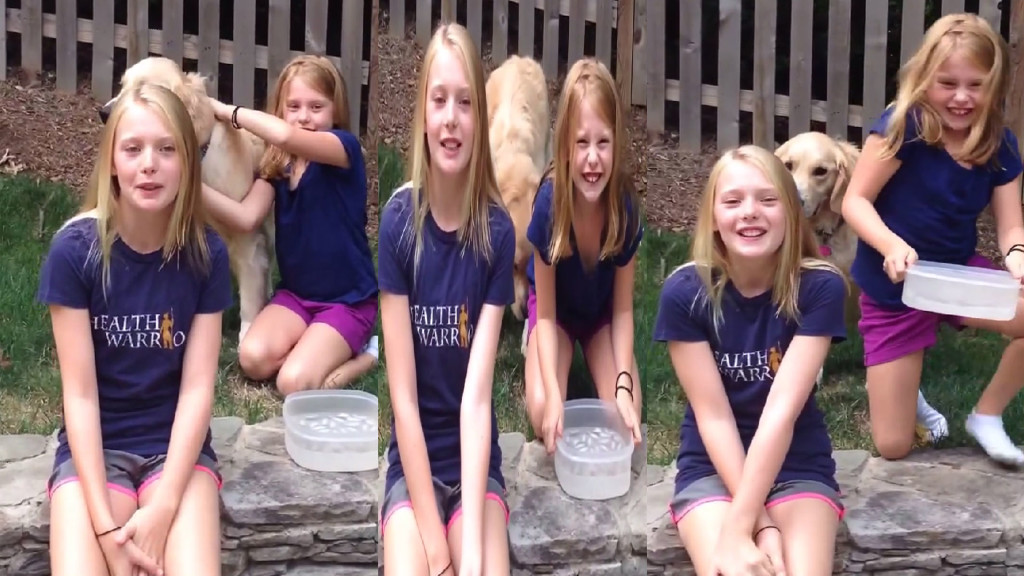 And being Good Samaritans for the ALS cause. They are heroes:):):)

The Ice Bucket Challenge, sometimes called the ALS Ice Bucket Challenge, is an activity involving dumping a bucket of ice water on one’s head or donating to the ALS Association in the United States. It went viral throughout social media during the Northern Hemisphere summer of 2014.[1][2]

The challenge dares nominated participants to be filmed having a bucket of ice water poured on their heads. A common stipulation is that nominated people have 24 hours to comply or forfeit by way of a charitable financial donation.[3]

The origins of the idea of dumping cold water on one’s head to raise money for charity are unclear and have been attributed to multiple sources. During the Northern-Hemisphere winter of 2013–14, a challenge of unknown origin often called the “Cold Water Challenge” became popular on social media in areas of the Northern United States. The task usually involved the option of either donating money to cancer research or having to jump into cold water.[4]

One version of the challenge started in New Zealand on July 4, 2014, with a fundraising page on behalf of the Cancer Society to help support patients and their families through the trauma of a cancer diagnosis. As with similar challenges, it was usually filmed so footage can be shared online.[5]

The challenge was popularized in the United States on June 30, 2014, when the Golf Channel Morning Show televised the social media phenomenon and performed a live on-air ice bucket challenge.[6] Soon after, on July 15, 2014, golfer Chris Kennedy did the ice-bucket challenge and challenged his cousin Jeanette Senerchia of Pelham, NY, whose husband, Anthony, has had ALS for 11 years. A day later she did the challenge while her 6-year-old daughter filmed her in front of their house. Senerchia’s network on Facebook connected with Pat Quinn, a 31-year-old in Yonkers, NY, who was diagnosed with ALS in March 2013. Quinn called upon his friends and family. Soon, his whole network was posting challenges, including family in Florida, friends in Ireland and Greece, and a bar full of locals, which was broadcast on local television.[citation needed]

Quinn’s Facebook network overlapped with Massachusetts resident and formerBoston College baseball player Pete Frates, who has ALS and began posting about the challenge on Twitter.[7]

The ice bucket challenge has also become popular in the United Kingdom through social media, with participants doing it for the Motor Neurone Disease Association and Macmillan Cancer Support.

The President of the United States, Barack Obama, was challenged by Ethel Kennedy but declined, opting to contribute to the campaign with a donation of $100.[8] Justin Bieber,[9] LeBron James,[10] and “Weird” Al Yankovic[11] also challenged President Obama after completing the Ice Bucket Challenge.

Within 24 hours of being challenged, participants are to video record themselves in continuous footage. First, they are to announce their acceptance of the challenge followed by pouring ice into a bucket of water. The bucket is then to be lifted overhead and poured over the participant’s head. Then the participant can call out a challenge to other people.

In the Northern-Hemisphere summer of 2014, the Ice Bucket Challenge went viral on social media and became a pop culture phenomenon, particularly in the United States, with numerous celebrities, politicians, athletes, and everyday Americans posting videos of themselves online and on TV participating in the event.[3][8]

Before the popularity of the Ice Bucket Challenge, levels of awareness, fundraising, research dollars, and overall public support for amyotrophic lateral sclerosis(ALS) were extremely low.[14] After the Ice Bucket Challenge went viral on social media, public awareness and charitable donations for ALS soared to unprecedented levels. On August 18, 2014, the ALS Association announced that it had received $15.6 million in donations compared to $1.8 million during the same time period (July 29 to August 18) in the prior year. These donations came from both existing donors and 307,598 new donors to the Association.[15]

Steve-O questioned the campaign, suggesting that celebrities’ videos generally forgot to share donation information for ALS charities, and that the $15 million dollars in funds is insignificant, given the star power of the celebrities participating. He noted that, of the videos he viewed, only Charlie Sheen and Bill Gates noted that point is to donate money.[16]

This challenge has inspired other charities in the UK to get involved, including Macmillan Cancer Support, who are calling it the Macmillan Ice Bucket Challenge.[19]