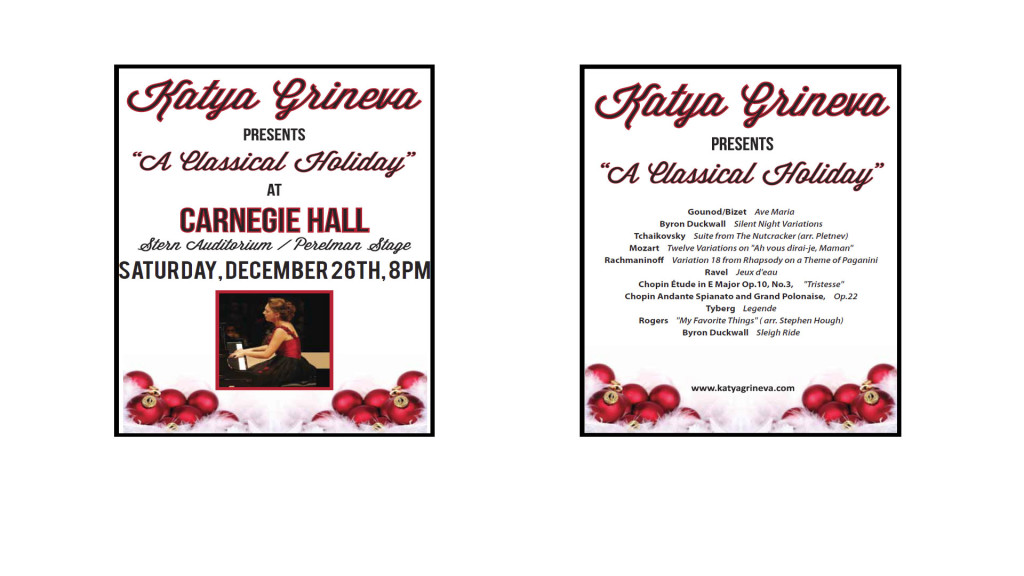 Celebrating her 15th solo appearance at Carnegie Hall, classical pianist Katya Grineva presents an evening of holiday music and virtuoso romantic masterpieces for one night only.The Russian native, whose dream it was to one day play at the iconic venue, is the first woman to perform as a soloist at Carnegie this many times. Known for her deep connetion to the Romantics, Katya mixes staples by Mozart and Chopin with various seasonal chestnuts. Performing works from her latest album A Classical Holiday, Katya showcases new arrangements of Christmas classics including “Silent Night”, “Sleigh Ride”, and “My Favorite Things” as well as traditional carols and pieces from The Nutcracker.

Known for her romantic and poetic style, she has engaged and entertained audiences throughout the United States, Europe, South America and Asia. Born in Moscow, Ms. Grineva began studying piano at the age of five. She attended the Moscow Music School and studied with prominent Professor Pavel Messnar under the aegis of the prestigious Moscow Conservatory. It was during her tutelage by Messner that she began giving recitals and experiencing the “special and spontaneous” interaction between that artist and the audience that is the hallmark of her music.

“For me, playing a concert is not just a chance to express myself” shares Ms. Grineva, “but rather an opportunity to lose myself in the rapture of true beauty.”

Peace Day Party Sizzle Reel. This is a segment from our 2013 Peace Day Event, young Japanese children plead for the safety of their Syrian children friends in the name of Peace.
Next Post: The World Peace Prayer Society