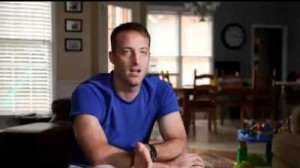 Casey Tibbs faced a life-changing event when a motorcycle accident forced him to amputate his right leg. Tibbs was a multi-sport athlete growing up, so instead of letting this disability discourage him, he found rewarding competition in the Paralympic Games.

In 2004, Tibbs became the first American active-duty military member to compete in a Paralympic Games, and is now a two-time gold medalist in the men’s 4 x 100-meter relay.

Now Tibbs has set his sights on the 2012 Olympics and partnership with Kellogg’s Olympic campaign. Tibbs follows his nutrition closely and believes that breakfast is the most important meal of the day.

Kellogg’s has been helping people start their days right for more than 100 years, so it makes sense that they are celebrating the start. Tibbs will be one of eight Olympic hopefuls making up Team Kelloggs / www.facebook.com/Kelloggs.

You can find out more information about Casey by viewing his “start story” video at:
http://www.youtube.com/watch?v=W_LJgQSw1uE

Tibbs was a multi-sport athlete growing up, and when he lost his right leg below the knee as the result of a motorcycle accident, he saw no reason to stop competing and went on to win multiple Paralympic medals, including two golds. As a Chief Petty Officer in the Navy training to qualify for his third Paralympic Games, Tibbs and wife Robyn together focus on raising their three children, a 4-year-old son, Taylor, an 18-month-old daughter, Reagan and a 2-month old son, Trent.

TIBB’S APPROACH TO NUTRITION
• Nutrition is essential to Tibbs’ success, and he believes breakfast is the most important meal. “As an athlete, you’ve got to have a good breakfast,” he says. He lives a very healthy lifestyle, drinks lots of water and watches his calories.
• A few of Tibbs’ favorite Kellogg’s® products include Kellogg’s Frosted Flakes® and Mini-Wheats® cereals.

OFF THE FIELD
• When assigned to the Naval Medical Center in San Diego, Tibbs worked with the “Morale, Welfare and Recreation Program,” administering fitness programs for members of the military who have been injured while on active duty.
• As an amputee, Casey relates well to patients and serves as a mentor during the rehabilitation process.