Pete Yarrow Universal Peace Day, of Peter, Paul & Mary Fame share his love for Peace some years ago with Good News! Peter is always there for Peace! Click Here for Video & Podcast…

You are here: Home / Public Service / Events / Pete Yarrow Universal Peace Day, of Peter, Paul & Mary Fame share his love for Peace some years ago with Good News! Peter is always there for Peace! Click Here for Video & Podcast… 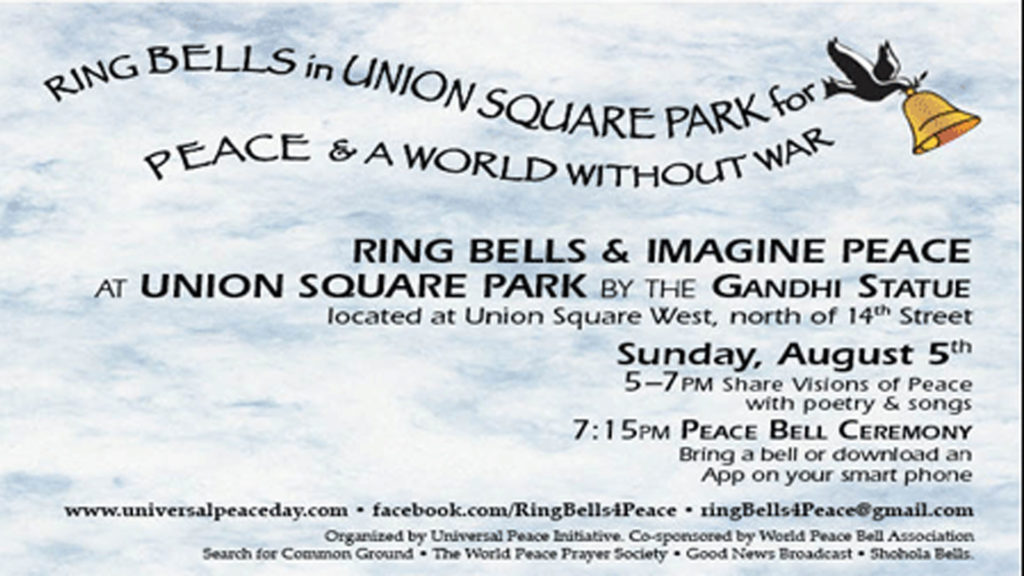 Ring Bells Around the World

For Peace & A World Without War

Commemorating the 67th Anniversary of the Bombings of Hiroshima and Nagasaki

WHERE: NEW LOCATION!! UNION SQUARE PARK by the GANDHI STATUE

Located at Union Square West between 14th and 15th Streets

New York, New York– Join in a Peal for Peace Bell Ringing Project, a global event of ringing bells around the world for Peace and a World Without War. On Sunday, August 5th, join a gathering by the Gandhi statue in Union Square Park to commemorate the exact moment of the 67th Anniversary of the Hiroshima Bombing.

Beginning at 5PM, the public is invited to participate in sharing their visions of Peace with poetry and songs. At 7:15PM, there will be a Bell Ringing Ceremony featuring a 7 foot tall bell from Shohola Bells and a Peace Pole from The World Peace Prayer Society, with the words, “May Peace Prevail on Earth,” in English, Japanese, French and Spanish. Everyone is invited to bring bells to join in. Afterwards, John Lennon’s song, “Imagine,” will be sung.  Performers will include Ray Korona, Russell Daisy, Barry Gruber and other stellar musicians.

The concept of Universal Peace Day (UPday) is to bring people around the world together to share their vision of peace and to trans- form a remembrance of horror into a rededication of life. The legacy of UPday, sponsored by Art For The People, began in 1984 in Central Park, where Peter Yarrow and others performed before a candle lighting ceremony at the exact moment of the Hiroshima bombing. Over the years, UPday events have taken place in numerous locations including: Dag Hammerskjold Plaza, Riverside Park, Battery Park, Union Square, The Riverside Church, Church Center of the UN, Church of St. Paul and St. Andrew, and the NY Buddhist Church.

Rita Cosby – Emmy Winning Broadcaster shares her love for her Dad in her book.
Next Post: Ain’t Technology Wonderful?