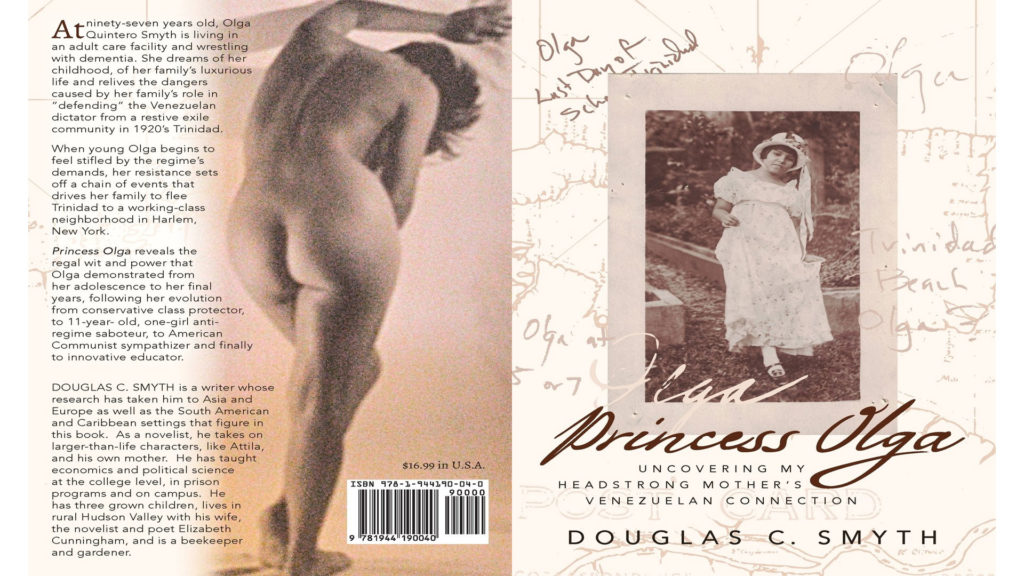 Find My smashwords Books: Body Destiny and From Renata with Love at https://www.smashwords.com/profile/view/douglassmyth

Everyone knew Olga was a princess, even if one of her own devising. Princess Olga is her fictional memoir. Olga, beginning at age 97, dreams of her childhood in Port of Spain, untangling a family mystery of political intrigue: why her Venezuelan family, living in luxury, fled Trinidad for Harlem in 1924.

Olga was named, she claimed, in 1913, by and for a real Russian Princess:Princess Olga, sister of the reigning Tsar Nicholas. Olga, a babe in arms, was onboard ship going from Margarita, Venezuela to Port of Spain in the Crown Colony of Trinidad.

Port of Spain was where Olga first learned her power as Princess.

Except when she is ushered out of bed, or to the dining room table, Olga, beginning at age 97, dreams back to her childhood in Port of Spain. Her family was intimately connected to the Venezuelan regime; her uncle was its Consul General in Trinidad; her father worked for the dictatorship in the gold fields of Amazonas and most of his brothers worked for the regime, as well. In her dreams, she untangles a mystery of political intrigue and why her family fled Trinidad. She discovers the important part she played, causing her family, living in luxury, to abandon Port of Spain for Harlem in 1924.

She then dreams of her arrival in New York, and of her eventual triumph in her new country: a scholarship to Mount Holyoke, marriage into an old literary family, (Hawthorne and Smyth) but, until she receives a steamer trunk full of cash, she is still connected to the regime in Venezuela.

Hardback and paperback copies are available and may be ordered at all book retail venues, including Amazon and Barnes & Noble. E-books are also available.

Thought for the Day…
Next Post: What’s Your Good News?