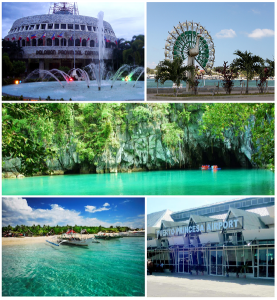 Puerto Princesa (Filipino: Lungsod ng Puerto Princesa) is a city located in the western provincial island of Palawan, one of 80 provinces which make up the Philippines. Though the provincial seat of government for Palawan, the city itself is one of 38 independent cities within the Philippines not controlled by the province in which it is geographically located and is therefore an independent area located within Palawan.

Folk etymology attributes the name “Puerto Princesa” to a princess-like maiden who in the early days is said to have roamed around the place on certain nights of the year. On the other hand, practical people attribute the name to the geographical advantages of the place as a seaport – naturally protected the whole year round and endowed with a depth that can accommodate any size of shipping – a royal haven for vessels or a virtual princess of ports as thus indicated by Spanish colonizers on the country’s map.

Historically, the place was named after Princess Asunción, born in 1864 to Queen Isabella II and her consort, Francisco de Cádiz. When the princess suffered an untimely death, the Queen changed the name to Puerto de la Princesa. Eventually, the name was reduced to Puerto Princesa as it is known today.

Puerto Princesa is known as the Eco-Tourism Center of the Philippines. In recent years, the city has seen a remarkable increase in the number of tourists bringing with them trade and businesses for the city. Many hotels ranging from basic to five-star luxury accommodations have been developed since the 1990s to cater to a growing number of foreign and local tourists in the city. There are also a large selection of restaurants, bars, and shops including the recently completed Robinsons Place Palawan shopping mall.

Most tourists come to Puerto Princesa to visit the Puerto Princesa Subterranean River National Park located 50 km north of the city. It was named one of the New7Wonders of Nature. The city is also the jump-off point for exploring the Tubbataha Reef.

Puerto Princesa Subterranean River
The most famous landmark of Puerto Princesa, this subterranean river is the longest navigable underground river in the world. It features a limestone karst mountain landscape and many stalactites and stalagmites formations.

Tubbataha Reef
Tubbataha Reef, another UNESCO World Heritage Site, is located 181 km southeast of the city in the Sulu Sea near the town of Cagayancillo. Over 1000 species inhabit the reef; many are already considered as endangered. Animal species found include manta rays, lionfish, sea turtles, clownfish, and sharks.

Ugong Rock
A 75-foot limestone formation in the middle of farmlands and karst forests located near the Underground River. Main activities in the site include spelunking and zip line.

Plaza Cuartel
Plaza Cuartel is the restored ruins of an old garrison where Japanese soldiers burned 143 American prisoners of war inside a tunnel and stands as a grim reminder of World War II.