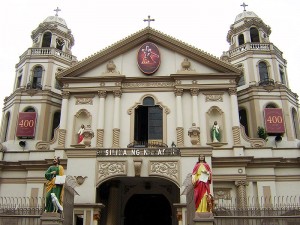 Quiapo is a district and a primary city square of Manila. It derives its name from the water cabbage (Pistia stratiotes), which is named Quiapo or Kiapo in the Tagalog language. Referred to as the “Old Downtown of Manila”, Quiapo is home to the Quiapo Church, where the feast of the Black Nazarene is held with millions of people attending annually. Quiapo has also made a name for itself as a place for marketplace bargain hunting.

Plaza Miranda, in the heart of the Quiapo district, is a town square named after Jose Sandino y Miranda, who served as secretary of the treasury of the Philippines from 1853 to 1863. It is located in front of the Quiapo Church, and has become a popular site of political rallies. On August 21, 1971, while the Liberal Party held their Miting de Avance in the plaza, a bomb exploded, killing nine and injuring almost 100 civilians.

The Quiapo district is also home to a sizable Muslim population in Manila. The Golden Mosque and Green Mosque are located there. A veritable army of fortune tellers and stores offering herbal products surround the Quiapo church. Ongoing sales of pirated goods and thievery are prevalent in the district.

During the American insular government and commonwealth periods until the late 1970s, Quiapo and its surrounding vicinities like Avenida Rizal, Binondo, Santa Cruz, Escolta and the Manila university belt, were the centers of trade, fashion, art, higher learning and activities of the social elites of Manila. However, as the Manila Light Rail Transit System’s Yellow Line was built over Rizal Avenue, smog and vehicle emissions were trapped under the line, leaving the streets below dark, gloomy and promoted an increase in crime and transients, as well as the exodus of many long-time establishments. After the People Power Revolution in 1986, the vibrancy of Quiapo further diminished, with the void being filled with makeshift markets to accommodate visitors to the Quiapo Church.

In recent years, the local government of Manila, spearheaded by then Mayor Lito Atienza, launched the Buhayin ang Maynila (“Revitalize Manila”) project which greatly rehabilitated Quiapo and its vicinities, most especially Plaza Miranda, the Arsenio Lacson Underpass and the University Belt. Parts of Rizal Avenue, starting from Carriedo Street to Claro M. Recto Avenue, were converted into pedestrian shopping arcades.

Quiapo is geographically located at the very center of the city of Manila. It is bounded by Estero de San Miguel to the South, San Miguel to the east, Recto Avenue to the north and Quezon Boulevard to the west.