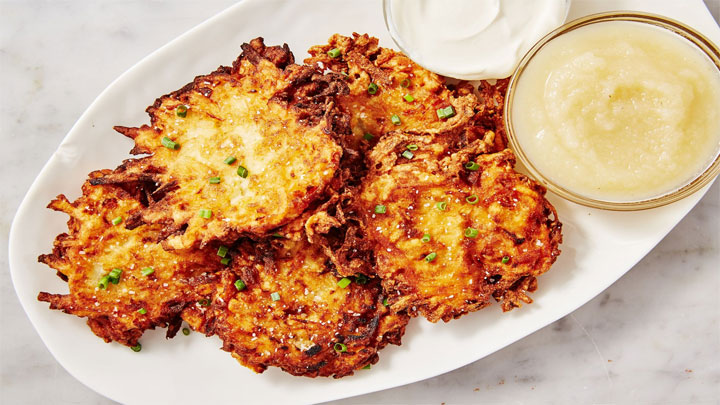 Potato pancakes are shallow-fried pancakes of grated or ground potato, flour and egg, often flavored with grated onion or garlic and seasoning. Potato pancakes may be topped with a variety of condiments, ranging from the savory (such as sour cream or cottage cheese) to the sweet (such as apple sauce or sugar), or they may be served ungarnished. Potato pancakes are sometimes made from mashed potatoes to produce pancake-shaped croquettes.

Potato pancakes are commonly associated with traditional cuisines of Luxembourg , Latvia (as kartupeļu pankūkas), Lithuania (as bulviniai blynai), Austria, Belarus (as draniki), Germany (e. g. as Kartoffelpuffer), Poland (as placki ziemniaczane), Ukraine (as deruny), Ashkenazi Jewry (as latkes or latkas (Yiddish: לאַטקעס, Hebrew: לביבה levivah, plural לביבות levivot)), Hungary (as tócsni), Slovakia, Persia and the Czech Rep. (as bramborák or cmunda), although other cuisines have adopted similar dishes. It is also the national dish of Belarus. In Ukrainian, Belarusian and Russian cuisines, potato pancakes are commonly known as deruny (Ukrainian: деруни) or draniki (Russian: драники, Belarusian: дранікі). Throughout Germany, potato pancakes are also very common under the names Reibekuchen or Kartoffelpuffer, and they are eaten either salty (as a side dish) or sweet with apple sauce, blueberries, sugar and cinnamon; they are a very common menu item during outdoor markets and festivals in colder seasons; a traditional favorite in southern Indiana during holiday festivities.

The Rösti from Swiss cuisine differs insofar as it never contains egg or flour.

In the North-East of England (particularly County Durham), there is a popular dish known as tattie fish– “tattie” being the local slang for potato, and “fish” because the pancake resembles a deep fried piece of fish. The pancake consists of flour, eggs, shredded potatoes and onions. Some people add tomato or cheese to the mix, depending on taste.

A form of potato pancake known as boxty is a popular traditional dish in most of Ireland. It is made in a similar way but using more starch.

The Swedish version of unbound potato pancakes is called rårakor. When prepared with a batter of wheat flour, milk, egg, and shredded potatoes and fried like thin pancakes, they are called raggmunk, the word “ragg” means crispy and “munk” derives from the Swedish “munkpanna”, which is literally translated as donutpan. Both kinds are enjoyed with fried pork and lingonberry jam.

The British also brought the potato pancake to Zimbabwe, Africa when Zimbabwe was a colony of Britain. They are still eaten today, where they are affordable.

Latkes (Yiddish: לאַטקע) are traditionally eaten by Jews during the Hanukkah festival. The oil for cooking the latkes is symbolic of the oil from the Hanukkah story that kept the Second Temple of ancient Israel lit with a long-lasting flame that is celebrated as a miracle. Despite the popularity of latkes and tradition of eating them during Hanukkah, they are hard to come by in stores or restaurants in Israel, having been largely replaced by the Hanukkah doughnut due to local economic factors, convenience and the influence of trade unions.

The word “latke” itself is derived (via Yiddish) from the Russian/Ukrainian word латка meaning “patch.” The word לביבה leviva, the Hebrew name for latke, has its origins in the Book of Samuel‘s description of the story of Amnon and Tamar. Some interpreters have noted that the homonym לב levav means “heart,” and the verbal form of l-v-v occurs in the Song of Songs as well.

Latkes need not necessarily be made from potatoes. Numerous modern recipes call for the addition of ingredients such as onions and carrots. Prior to the introduction of the potato to the Old World, latkes were, and in some places still are, made from a variety of other vegetables, cheeses, legumes, or starches, depending on the available local ingredients and foodways of the various places where Jews lived. 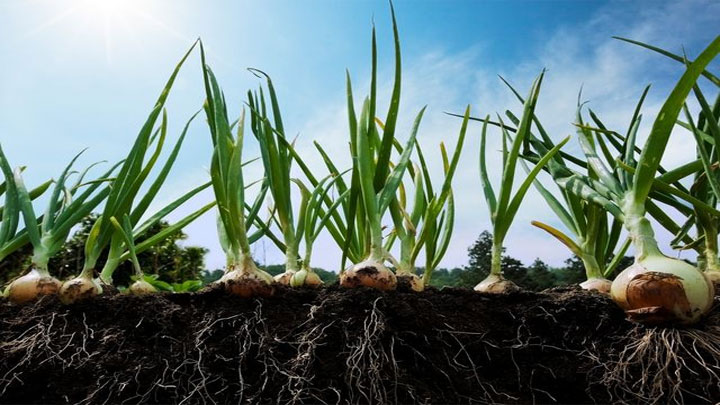 Happy DYI HOME just published an updated, comprehensive guide on how to grow onions . It is completely free and y ou can find it here: https://happydiyhome.com/how-to-grow-onions/

BTW my Uncle Artie was in the onion and potato business big time, cause in the Army he and his buddy had KP… Kitchen Patrol duty cause they fooled around so much..made people laugh..important when fighting a war. They said if they lived they would open a potato and onion business..

they did, and very big one..

i and my company started www.goodnewsplanet.tv 23 years ago from some of my inheritace from Uncle Artie;)

Thank you with gratitude Uncle Artie

Here is a Thought for the Day

Paul Sladkus, on Piano Performs for our Heroes at the Montauk Manor on January 12, 2021.
Next Post: We wish you bad luck Supreme Court Justice John Roberts Commencement Speech