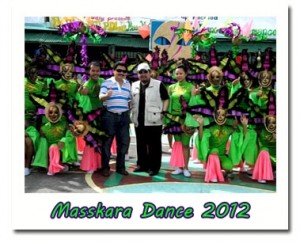 The BJMP Taculing inmates wrote history last Saturday afternoon when they held their own splendid MassKara Dance presentation at the courtyard of their facility.

Leonardia introduced Hagedorn who is best recognized as one of the more successful progressive local leaders of the Philippines with his passion and dedication towards the protection of the environment.

Hagedorn’s leadership is directed towards establishing a harmony between the environment and development that positioned the City of Puerto Princesa as a model for eco-tourism in the country.
Under his watch as Mayor, the Puerto Princesa Underground River was proclaimed this years as one of the 7th New Wonders of Nature.

In his speech, Hagedorn who is running as Senator for the May 2013 elections thanked Leonardia, the jail officials and the inmates for receiving him warmly.

During its recent meeting in Bacolod City, the National Executive Board-Expanded of the League of Cities of the Philippines unanimously passed a resolution endorsing the candidacy of Hagedorn for senator.

Hagedorn donated P50,000 to the facility while the Guam visitors, another USD200. The jail officials and inmates gave their appreciation through a thunderous applause.

The 40 or so inmates performed their MassKara presentation before Hagerdorn, Leonardia and the Guam visitors.

In attractive green costumes and colorful headdresses, the inmates danced energetically to the tune of the official music of the 33rd to the delight of the VIPs, jail officials and jail inmates.