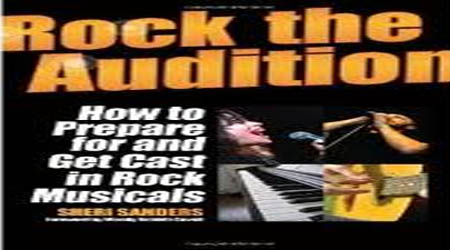 Sheri Sanders is a force of nature and when it comes to succeeding in the pop/rock genre of musical theatre, she wrote the book, literally.

Sheri had 20+ years behind her as an actor when she noticed that rock and pop musicals were beginning to dominate Broadway, so she piloted her very first Rock The Audition class at Pace University. She listened to her new students sing, assigned them all of her favorite hits off the radio, and taught them how to interpret rock songs and bring themselves into the stories that popular music tells.

She began giving master classes all over the country, from colleges to private musical theatre training programs, to teach voice teachers, acting teachers and their students how to style rock music.

Eleven of her current students are on Broadway and 62 of her students have been in rock musicals on Broadway, on tour, in workshops and regionally since she began.

Sheri has written the very first book on how to audition for rock musicals. Rock the Audition (Hal Leonard Books, May 24, 2011) outlines what it takes for the actor/singer to succeed, and Sheri interviews prominent members of the Broadway theater community, from Bernie Telsey and Jay Binder to Steven Oremus, Andy Blankenbuehler, Kerry Butler and Alex Lacamoire. Sheri gives the aspiring performer the proper tools to successfully audition for every genre of rock musical on Broadway. Rock the Audition teaches performers how to pick songs that create a dramatic arc, create their own appropriate cuts and arrangements, and successfully communicate the feel of a song to a pianist for proper support, and truly understand the vocal styles of different genres and how the styles changed over time.