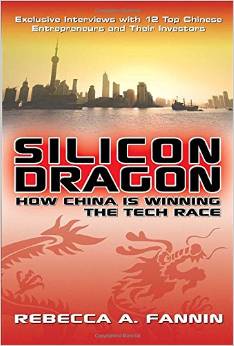 Silicon Dragon was formed in 2010 by Forbes journalist, author and media entrepreneur Rebecca Fannin. Ms. Fannin has been covering tech innovations trends globally for 15 years, beginning with Red Herring magazine during the dotcom era. She is the author of two influential and well-received books, Silicon Dragon (McGraw-Hill, 2008) and Startup Asia (Wiley, 2011).
Silicon Dragon spans a global network of 15,000 startups, emerging companies, venture capitalists, angel investors and startup stakeholders. The group is based in Silicon Valley with offshoots in New York City and Hong Kong.
For more info, see:
www.silicondragonventures.com
and
http://www.forbes.com/sites/rebeccafannin/
@rfannin
@silicondragon