Silsilah Dialogue Movement in the Philippines to Receive the 2013 Goi Peace Award. 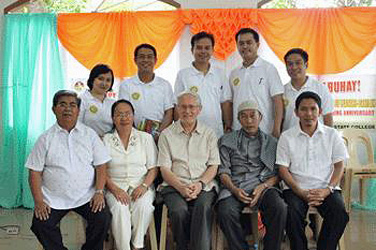 The Goi Peace Foundation will bestow the 2013 Goi Peace Award on the Silsilah Dialogue Movement, a grassroots initiative promoting interfaith dialogue and peace in the Philippines.

The annual Goi Peace Award honors individuals and organizations in various fields that have made outstanding contributions toward the realization of a peaceful and harmonious world for humanity and all life on earth. Created in 2000, previous Goi Peace Award recipients include James Lovelock, Oscar Arias, Bill Gates, Deepak Chopra and Helena Norberg-Hodge.

On behalf of the Silsilah Dialogue Movement, Fr. Sebastiano D’Ambra, PIME, will receive the award at a ceremony during the Goi Peace Foundation Forum 2013 to be held at Nikkei Hall in Tokyo on November 27, 2013.

The selection committee has chosen the Silsilah Dialogue Movement for the Goi Peace Award “in recognition of its many years of commitment to promote dialogue for peace and solidarity among Muslims and Christians in the Philippines. The dedicated efforts of the members of the movement have not only advanced the process towards lasting peace in their communities, but have inspired many people around the world with an example of true dialogue based on spirituality.”

The Silsilah Dialogue Movement was officially founded in 1984 in Zamboanga City, Philippines by an Italian missionary Fr. Sebastiano D’Ambra, PIME, born out of his experience of violence and war in the 70’s while on his first Philippine mission in Mindanao.

Starting off with a group of Muslim and Christian friends joining Fr. D’Ambra in a dialogue, the movement has steadily grown on the grassroots level and has been involved actively and dynamically in fostering interfaith harmony and reconciliation in the Philippines for almost 30 years. Despite adversities such as the killing of its members, the movement has contributed significantly to building a culture of dialogue over the years, leading to the recent signing of the Framework Agreement for peace in Mindanao between the Philippine government and the Moro National Liberation Front.

Silsilah is an Arabic word which literally means “chain” or “link”. As used by the Sufis (Muslim mystics), it describes a process of attaining an experience of the Divine. It also implies spiritual linkage of humanity as created by the same God. The movement proposes a “life-in-dialogue,” which encompasses dialogue with God, with self, with others and with creation. It encourages all people to undergo a process of personal transformation that leads to a social transformation.

Silsilah offers various educational courses, seminars, training activities and exposure-immersion programs, reaching out to all sectors of society, including educators, youth, media, leaders, and the disadvantaged. Its initiatives not only focus on interfaith dialogue, but also on sustainable agriculture, environmental advocacy, holistic healthcare and a wide range of community services.

Among the thousands of Muslim and Christian alumni who have participated in these programs, many of them are active in governments, NGOs, schools, religious communities and parishes. There are currently 18 Silsilah Forums formed by alumni and friends of the movement that are promoting the culture of dialogue and peace in different areas in the Philippines and beyond.

About the Goi Peace Foundation

Established in Tokyo, Japan in 1999, the Goi Peace Foundation is a public benefit organization with a mission to support the evolution of humanity toward a peaceful and harmonious new civilization. Through various educational and outreach programs, it promotes consciousness, values and wisdom for creating peace, and builds cooperation among individuals and organizations across diverse fields, including education, science, culture and the arts. The Foundation is an NGO in Special Consultative Status with the Economic and Social Council of the United Nations. It also maintains official relations with UNESCO. Website: www.goipeace.or.jp

May Peace Prevail On Earth!