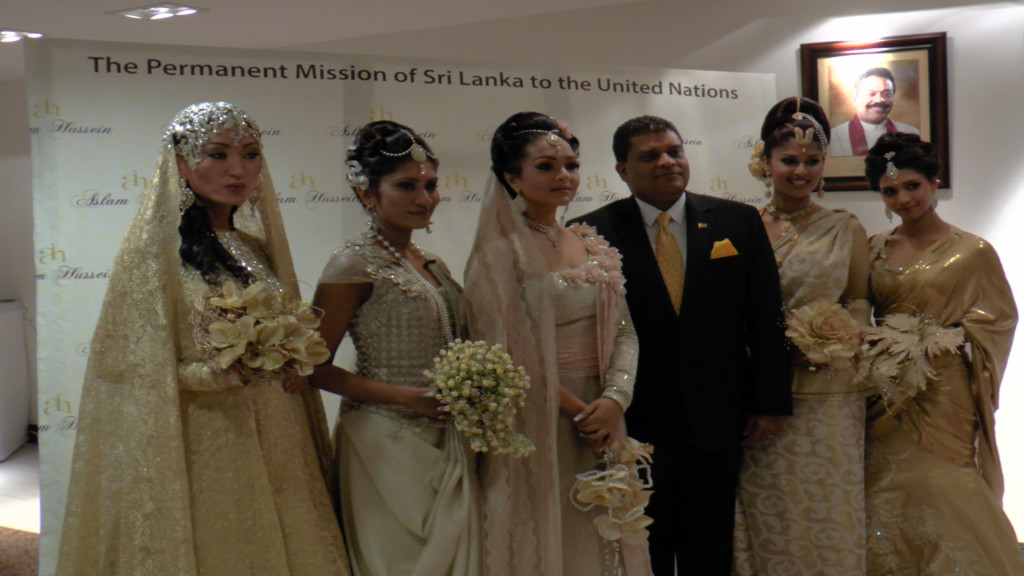 Sri Lanka’s top fashion designer Aslam Hussein put on a spectacular program before a packed house of celebrity media and dignitaries recently, at the Permanent Mission of Sri Lanka to the United Nations in New York. The dynamic designer got a standing ovation for his elegant and exceptionally creative designs, and became the first Sri Lankan fashion guru ever, to be brought to America for such a show. The evening was complete with traditional dance, song, and many exquisite gowns from his magnificent Spring and Summer Collecton. Gold and Bronze ruled the event, as well as spectacular, vibrant colors on silks that glistened on the illuminated runway. Aslam has been a famed designer for a quarter of a century in his native country, with attire showcasing his complex embroidery work of beads, sequins and stones which shape his signature and truly unforgettable pieces. TV star Rita Cosby praised Aslam in her heartwarming speech and noted that in attendance were media from around the globe. The invitation-only event was organized by Sri Lanka’s Ambassador Major General Shavendra Silva and the elegant Sujeewa Nelson. Dignitaries from Nigeria, Honduras and the Phillppines were also enthralled by Aslam, who is now engrained in the world’s fashion elite.  Article by the wonderful  www.timessquaregossip.com, go to the site to learn what’s happening in New York!

Major General Shavendra Silva, WWV, RWP, RSP, USP, psc, CR is a Sri Lankan general and diplomat. The current Sri Lankan Deputy Permanent Representative to the United Nations in New York, he was the former Director of Operations, Sri Lanka Army and the General Officer Commanding, 58 Division during the Sri Lankan civil war. Early life Silva was born on 22 June 1964 and had his education at St. Joseph’s College, Anuradhapura, Vijaya College, Matale and St Thomas’ College, Matale. At school he was the band leader of the western band, Captain of the first XI cricket team and Sergeant of the Senior Cadet Platoon, St. Thomas’ College, Matale. Silva is married and has two daughters. Sri Lanka Army Silva joined Sri Lanka Army on 1984 and he was the former Director of Operations, Sri Lanka Army and the General Officer Commanding, 58 Division during the final phase of Sri Lankan civil war. He was a highly decorated Commando officer, being awarded the Weera Wickrama Vibhushanaya, Rana Wickrama Padakkama and the Rana Sura Padakkama at once, a first in the Sri Lankan military history. He was the youngest promoted as a commanding officer. As an officer instructor at theSri Lanka Military Academy (SLMA) in Diyatalawa, he trained the first foreign cadets to attend SLMA and went on to become its commanding officer. During 2002–2004 peace talks he took part in negotiations to open the A-9 Main Supply Route (MSR). With the resumption of hostilities he become the Brigade Commander of the Air Mobile Brigade and later took command of the famous 58 Division and was instrumental in the military capturing several former LTTE strongholds including the Mannar rice Bowl, Vedithalathivu, Nachchikuda, Mulangavil, Devils Point, Pooneryn, Kilinochchi, Paranthan, Elephant Pass, Dharmapuram, Vishvamadu, Suvandipuram, Thevipuram Puthukudirippu, Puthumathalan, Wellamullu vaikkal and the last inch of enemy held Karayamulli vaikkal in the mangroves of Nanthikandal lagoon in the Mullaithivu district. After the end of the war he was appointed as Director of Operations of the Sri Lanka Army and promoted to the rank of Major General. In 2010, he took up position as Deputy Permanent Representative to the United Nations as the only serving army officer to hold such a post at the time of appointment. As at present he holds the rank and title of Ambassador in addition to his post at the United Nations Headquarters.