Sunrise at Ankor Wat, The Kingdom of Cambodia – Photo by Dawn A. Levy article by Terri Hirsch

You are here: Home / Communities / Asia / Sunrise at Ankor Wat, The Kingdom of Cambodia – Photo by Dawn A. Levy article by Terri Hirsch 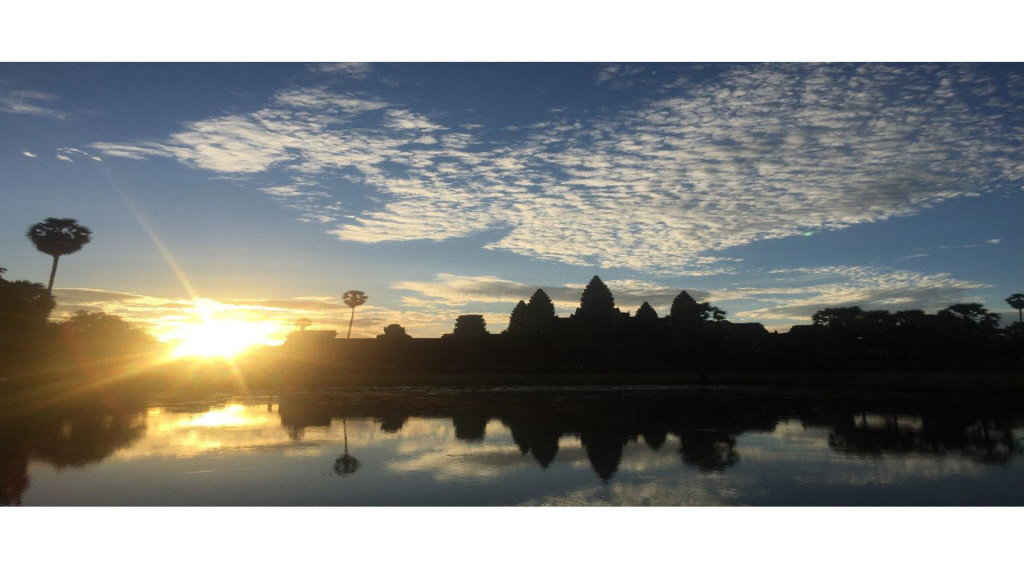 Southeast Asia
The Kingdom of Cambodia
By Terri Hirsch

The lure of the past is brought to life in Siem Reap nestled between the
rice paddy countryside along the Siem Reap River that serves as the gateway
to the temple ruins. Officially known as the Kingdom of Cambodia and once
known as the Khmer Empire it is located in the southern portion of the
Indochina Peninsula in Southeast Asia bordered by Thailand to the northwest,
Laos to the northeast, Vietnam to the east and the Gulf of Thailand to the
southwest.

Siem Reap has tree lined boulevards, an historical museum and artisan
workshops consisting of art, wood and stone carvings, statues, furniture and
handicrafts. The City is best explored on foot or on a “tuk tuk” (a
rickshaw with the front-end of a motorcycle). Although not luxurious, they
are easy to find and inexpensive.

The Sofitel Angkor Phokeethra Golf & Spa Resort, a French colonial style
resort designed by Thai architect Choochart Polakit, is situated ten minutes
from the airport and five minutes away from the magnificent temples of Siem
Reap. It showcases intimate living space with timber floors and wrap-around
terraces surrounded by lagoons, landscapes and bright turquoise
mini-fountains, plus an outdoor swimming pool with a swim-up bar, three
restaurants, an 18-hole championship golf course and a spa for rejuvenation.

One of the largest and most important archeological sites in Southeast Asia
is the Angkor Archeological Park, a UNESCO World Heritage Site, comprised of
dozens of ruins including the legendary Angkor Wat. In the darkness of the
night we rode in rickshaws and used flashlights to get to the Angkor Wat
site where we witnessed one of the most mesmerizing sunrises over Angkor
Wat. Afterwards, we continued touring other remains of the Khmer era.

Major highlights of the Park included the Baynon, known for the large number
of smiling faces sculptured on the towers. A journey through one of the
most spectacular ruins at Ta Prohn is a breathtaking site of trees emerging
out of temple walls that become intertwined with the temple stones –
featured in the film “Tomb Raider.” A huge platform known today as Terrace
of the Elephants runs from north to south across the east front of the Royal
Palace. The walls are carved with various scenes of court figures,
elephants and bird-like creatures. Also shown were hunting scenes with
elephants carved into the wall. In several places the elephant appears to
be fighting another creature, possibly a lion.

Upon return to the hotel there was time for visiting the outdoor market
before dinner and the Aspara dancing show at the hotel featuring local
Cambodian/Khmer folk dancers. An Aspara is a female spirit of the clouds
and waters in Hindu and Buddhist mythology.
Monday morning we boarded a motor coach for a six-hour transfer from the
Sofitel Angkor Phokeethra Golf & Spa Resort to our ship moored at Prek Kdam,
Cambodia. Before embarking on our Mekong River cruise we travelled through
mountain roads viewing numerous rice paddies, oxen, small villages and
outdoor markets. We joined the AmaLotus, our floating hotel for the next
7-nights, in the late afternoon and met fellow passengers at a cocktail
party and dinner. The meals onboard were prepared by local chefs and
consisted of western cuisine as well as Vietnamese and Cambodian cuisine.
Wine and beer plus complimentary house brand spirits and soft drinks were
included throughout the cruise at lunch and dinner.
On Tuesday Kampong-Chhnang, one of the central provinces in Cambodia, was
our first stop on the Mekong River. Our tour was a motorboat excursion
along the Tonie Sap River viewing the wetlands, floating houses and fish
farms in the region. After lunch our guide took us on a leisurely walking
tour over dirt paths through the Koh Chen village visiting workshops that
specialize in silver jewelry and artifacts made from copper.
Wednesday we arrived in the city of Oudong, the former capital of Cambodia
and visited a Buddhist Monastery. The main attraction was a mummified monk
in a small chapel near the back of the temple. Inside the Monastery we
received a traditional blessing from Buddhist monks as we sat before them
listening to chanting and prayers and smelled the incense, candles and
flowers. Afterwards, an offering of a red thread was tied around our wrist
– a keepsake that signifies luck and prosperity.
The next stop was Kampong Tralach for the most popular transportation in
Cambodia – an oxcart. The Cambodian farmers use the oxcarts to harvest
crops, carry hay, animals and even their family members. Two of us were in
each cart as we travelled through the rural countryside of Kampong Tralach,
Cambodia for twenty minutes. Handrails were provided for each oxcart and we
were warned to keep our arms inside the cart to avoid arm injuries caused by
cart wheels.
After lunch on Wednesday we set sail for Phnom Penh, the capital and largest
city of Cambodia located on the banks of the Mekong River where we docked
overnight. Thursday morning we toured the Killing Fields. The mass graves
found here contain the remains of thousands of people. Survivor stories can
be heard from an audio tour – the loss of an infant, witness to a killing,
forced to leave home, anger, isolation and hope….
Thursday afternoon our guided tour of Phnom Penh included the Royal Palace,
Silver Pagoda and the National Museum. The Royal Palace, built in 1866, was
the home of the Cambodian King. At the end of the 19th century the Palace
was a small city with thousands of people living in courtyards. Inside the
Silver Pagoda were works of art, sculptures and hundreds of antique gifts
plus a Buddha statute made from pure gold with over 2,000 diamonds attached
to it. The National Museum, built in Khmer Style in 1917 by a French
architect, houses a collection of Khmer art dating from the pre-Angkorian
era.

Friday we cruised the Mekong River from Phnom Penh and crossed the
Cambodian/Vietnamese border before we anchored overnight in Tan Chau,
Vietnam. The next two days were spent touring numerous small cities before
arriving in Ho Chi Minh City, Vietnam for our flight home.