You are here: Home / Archives for audition 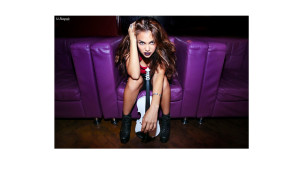 Born in Russia, Ada immigrated to the States at the age of 6, when she began her classical training on the violin. Upon auditioning for the prestigious Berklee College of Music, Ada was awarded a full scholarship, and it was the environment and experiences there that inspired her to discover her ability and passion for songwriting. Ada is a violin virtuoso who has created her own unique genre, combining her vocal talents, violin mastery and songwriting prowess for an outstanding pop melding. Her shows are always a spectacular display of musicianship by Ada and her band of Berklee College of Music graduates. … END_OF_DOCUMENT_TOKEN_TO_BE_REPLACED

Sheri Sanders is a force of nature and when it comes to succeeding in the pop/rock genre of musical theatre, she wrote the book, literally. Sheri had 20+ years behind her as an actor when she noticed that rock and pop musicals were beginning to dominate Broadway, so she piloted her very first Rock The Audition class at Pace University. She listened to her new students sing, assigned them all of her favorite hits off the radio, and taught them how to interpret rock songs and bring themselves into the stories that popular music tells. She began giving master classes all over the country, from colleges to private musical theatre training programs, to teach voice teachers, acting teachers and their students how to style rock music. Eleven of her current students are on Broadway and 62 of … END_OF_DOCUMENT_TOKEN_TO_BE_REPLACED

In 2020 we will take our event to 193 countries and other locations to create the largest world gathering & broadcast to share Peace, … END_OF_DOCUMENT_TOKEN_TO_BE_REPLACED