You are here: Home / Archives for comedian 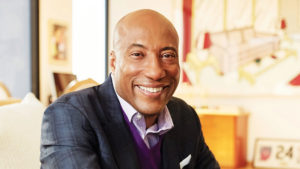 Early life and education Allen’s interest in show business began during his childhood, when he would accompany his mother to NBC studios in Burbank where she worked as a publicist. At age 14, Allen put together his first stand-up routine and began appearing on amateur night at comedy clubs throughout the Los Angeles area. Career Comedian Jimmie Walker saw Allen's stand-up act and invited the 14-year-old comedian to join his comedy writing team alongside promising young comedians Jay Leno and David Letterman. At age 18, Allen made his television debut on The Tonight Show Starring Johnny Carson. One of his earliest roles was as a regular presenter on the NBC series Real People during the show's entire run. His show "Jammin" was picked up as "Kickin' It with Byron Allen" in 1992, … END_OF_DOCUMENT_TOKEN_TO_BE_REPLACED

Carol Creighton Burnett (born April 26, 1933) is an American actress, comedian, singer and writer, whose career spans seven decades of television. She is best known for her groundbreaking television variety show, The Carol Burnett Show, originally aired on CBS. It was the first of its kind to be hosted by a woman.She has achieved success on stage, television and film in varying genres including dramatic and comedic roles. She has also appeared on various talk shows and as a panelist on game shows. Born in San Antonio, Texas, Burnett moved with her grandmother to Hollywood, where she attended Hollywood High School and eventually studied theater and musical comedy at UCLA. Later she performed in nightclubs in New York City and had a breakout success on Broadway in 1959 in Once Upon a … END_OF_DOCUMENT_TOKEN_TO_BE_REPLACED 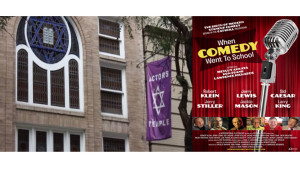 When Comedy Went to School (Mon, Oct 26th, 2015, 7:30 pm) Why are there so many Jewish comedians? Lawrence Richards is the Writer/Producer of this film, which explores this provocative question in a seriously side splitting look at the Borscht Belt and the Catskills resort era. A post-screening panel moderated by Mr. Richards will include Catskills scholar Joe Dorinson; superlative comediennes Jackie Hoffman (currently starring in On The Town) and Marilyn Michaels (star of Catskills on Broadway); and a possible surprise guest. Tickets: $20 in advance, $25 at the door, $15 for AT members and students under age 18. Part of HOT NIGHTS @ A COOL SHUL, a new Monday night series that seeks to stimulate dialogue about American and global Jewish culture through engaging, entertaining and … END_OF_DOCUMENT_TOKEN_TO_BE_REPLACED 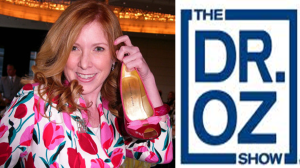 Andy Silver has the gift of word pictures and therefore helps disputing parties with a higher-than-expected settlement rate as a mediator for workplace, government, divorcing couples, and as an Ombuds. His website ResolutionExperts.com features a Master's degree in Conflict Resolution as well as a 25 year background in NLP (Neuro-Linguistic Programming) which he credits for his success. For his own stress management, he performs as a stand-up comedian. … END_OF_DOCUMENT_TOKEN_TO_BE_REPLACED

In 2020 we will take our event to 193 countries and other locations to create the largest world gathering & broadcast to share Peace, … END_OF_DOCUMENT_TOKEN_TO_BE_REPLACED