You are here: Home / Archives for copa 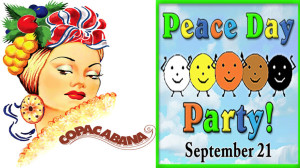 CopaCabana joins the Peace Day Party and they will host our Peace Day Party After Party as they support World Peace.  We speak to John Juliano who helped create the Copa and has been a good friend for many  years.  We will start to have every Tuesday for our www.goodnewsplanet.com and www.peacedayparty.org members a Copa Good News Party, starting September 23.  The Copacabana (often referred to as The Copa) is a famous New York City nightclub. Many entertainers, among them Danny Thomas, Pat Cooper and the comedy team of Martin and Lewis, made their New York debuts at the Copacabana. The 1978 Barry Manilow song "Copacabana" is named after, and is about the nightclub. Part of the 2003 Yerba Buena song "Guajira" is set there. The Copa was used as a setting in the films Goodfellas, Raging … END_OF_DOCUMENT_TOKEN_TO_BE_REPLACED

In 2020 we will take our event to 193 countries and other locations to create the largest world gathering & broadcast to share Peace, … END_OF_DOCUMENT_TOKEN_TO_BE_REPLACED