You are here: Home / Archives for dazuan 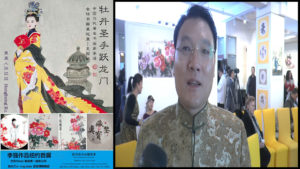 Born in a scholarly family, Mr. Li started learning Chinese traditional calligraphy from his grandfather when he was six years old. Over the course of 50 years, he poured his heart into Chinese traditional calligraphy and never stopped perfecting his skills. He is the one and only Chinese calligrapher who can use formal script, cursive script, official script, Jinming script, Dazuan script, Xiaozuan script, running script and Weibei script to write Chinese character. Among them, official script and running script are his specialties. Mr. Li pioneered Pu’er calligraphy and it’s famous for its vintage appeal, long lasting aroma and perfect combination of calligraphy and tea ceremony. It is the first of its kind and worthy of appreciation and collection. The main themes of Mr. Li’s paintings … END_OF_DOCUMENT_TOKEN_TO_BE_REPLACED

In 2020 we will take our event to 193 countries and other locations to create the largest world gathering & broadcast to share Peace, … END_OF_DOCUMENT_TOKEN_TO_BE_REPLACED