You are here: Home / Archives for hispanics 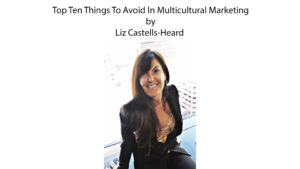 By Liz Castells-Heard 'Getting ethnic consumers' is not just about leaving money on the table, it will determine which brands win or lose. We are at the tipping point where the American critical mass is Multicultural and 'minority-majority' is an oxymoron. The need to do Multicultural marketing right is painfully obvious. Multiculturals are nearly 40% of U.S. consumers who spend $1.7 trillion yet still get under 18% of all ad dollars, and less of company resources. U.S. kids are already majority-ethnic, Millennials will be in 2022, and all of America by 2040. Key states like Texas, California and Florida are led by Hispanics, and ethnic-skewed top 15 DMAs, which make up half of our economic activity. Hispanics, African Americans and Asians will power all future growth in population, … END_OF_DOCUMENT_TOKEN_TO_BE_REPLACED

In 2020 we will take our event to 193 countries and other locations to create the largest world gathering & broadcast to share Peace, … END_OF_DOCUMENT_TOKEN_TO_BE_REPLACED