You are here: Home / Archives for jews 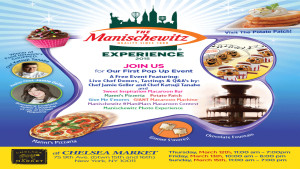 In September 2008, the company changed it’s name from the R.A.B. Food Group to the Manischewitz Company, under which it operates today. It all started with Rabbi Dov Behr The B. Manischewitz Company, LLC traces its beginnings back to the spring of 1888, when Rabbi Dov Behr Manischewitz opened a small Matzo bakery in Cincinnati, Ohio. A humble beginning It was largely from his spiritual concerns that he set out to make matzo or unleavened bread for Passover, first for his family and a few friends, but soon for many of the devout Jews of the city. His bakery soon evolved into a successful business, innovative and prosperous––though never inattentive to the spiritual needs of its customers. From small bakery to booming business By the end of the century, demand for his matzo … END_OF_DOCUMENT_TOKEN_TO_BE_REPLACED

Potato pancakes are shallow-fried pancakes of grated or ground potato, flour and egg, often flavored with grated onion or garlic and seasoning. Potato pancakes may be topped with a variety of condiments, ranging from the savory (such as sour cream or cottage cheese) to the sweet (such as apple sauce or sugar), or they may be served ungarnished. Potato pancakes are sometimes made from mashed potatoes to produce pancake-shaped croquettes. Backround and History Potato pancakes are commonly associated with traditional cuisines of Luxembourg , Latvia (as kartupeļu pankūkas), Lithuania (as bulviniai blynai), Austria, Belarus (as draniki), Germany (e. g. as Kartoffelpuffer), Poland (as placki ziemniaczane), Ukraine (as deruny), Ashkenazi Jewry (as latkes or latkas (Yiddish: לאַטקעס, Hebrew: … END_OF_DOCUMENT_TOKEN_TO_BE_REPLACED

In 2020 we will take our event to 193 countries and other locations to create the largest world gathering & broadcast to share Peace, … END_OF_DOCUMENT_TOKEN_TO_BE_REPLACED