You are here: Home / Archives for keeper 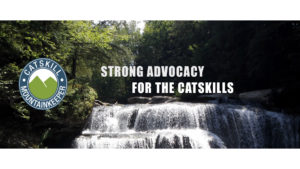 I am happy to invite you to a Catskill Mountainkeeper benefit dinner on December 7th featuring a talk on the climate crisis by Robert Thurman, renowned author, academic, and expert on Tibetan Buddhism. The evening, hosted by Sarah Johnson and Greg Cornell at their spectacular White Feather Farm in Saugerties, will benefit Mountainkeeper’s work to fight the climate crisis and advance our clean energy future. It’s going to be a great night, and we really hope you’ll be able to join us. The evening will start with cocktails and hors d’oeuvres, and then we’ll sit down for a delicious farm-to-table dinner in the White Feather Farm's beautiful barn. Following dinner, Robert Thurman will present information from the Climate Reality Project--former Vice President Al Gore’s visionary effort to … END_OF_DOCUMENT_TOKEN_TO_BE_REPLACED 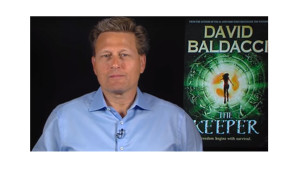 # 1 New York Times bestselling author, David Baldacci, will discuss his new book, THE KEEPER.. (THE KEEPER is the second in his young adult fantasy series. The FINISHER, which was the first, has been optioned for a movie.) Called a “master craftsman” by the Associated Press and “one of the greatest thriller writers of the last decade” by Strand Magazine, Baldacci, whose adult thrillers have more than 110 millions copies in print worldwide, ventured into new fictional turf last year with THE FINISHER. About David Baldacci: David Baldacci is the author of over twenty-eight books for adults, each of which has become both a national and international bestseller. His astonishing career started with Absolute Power, which was adapted into a major motion picture starring Clint Eastwood. … END_OF_DOCUMENT_TOKEN_TO_BE_REPLACED 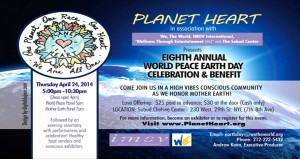 COME CELEBRATE!! GOOD NEWS PLANET WILL BE BROADCASTING AND MODERATOR OF THE  WORLD PEACE PANEL  THURSDAY - APRIL 24TH, 2014  Subud Chelsea Center 230 West 29th Street, New York City  4:00 pm to 11:00 pm Seating Limited! To Register Call: 212-222-5432 "Once a year we gather in friendship, love and light to celebrate   the rare gift of this glorious Planet Earth.  With wisdom, inspiration and gratitude we invite you   to join us for this Annual Festival at the Subud Chelsea Center,  and be counted as a Wisdom Keeper of our great planet." Listen here to PLANET HEART's PSA for 8th Annual World Peace Earth Day Celebration ! Voice Over Script written by Andrew Kaen; Vocals by Christine Marie aka IMOV; Produced and Edited by Rick Ulfik; … END_OF_DOCUMENT_TOKEN_TO_BE_REPLACED

In 2020 we will take our event to 193 countries and other locations to create the largest world gathering & broadcast to share Peace, … END_OF_DOCUMENT_TOKEN_TO_BE_REPLACED