You are here: Home / Archives for kissing 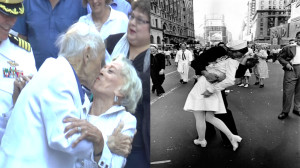 in Times Square photographed by Eisenstaedt. Good News speaks to this inspiring couple and they share their love for each other, for their country and for Peace. What a fantastic example of the Spirit of 45. Warren Hegg National Supervisor "Keep the Spirit of '45 Alive www.Spiritof45.org Follow us on Facebook! 408.857.5252 -J Day in Times Square is a photograph by Alfred Eisenstaedt that portrays an American sailor kissing a woman in a white dress on Victory over Japan Day (V-J Day) in Times Square in New York City, on August 14, 1945. The photograph, taken with a Leica IIIa camera, was published a week later in Life magazine among many photographs of celebrations around the United States that were presented in a twelve-page section titled Victory Celebrations.[1] A … END_OF_DOCUMENT_TOKEN_TO_BE_REPLACED

In 2020 we will take our event to 193 countries and other locations to create the largest world gathering & broadcast to share Peace, … END_OF_DOCUMENT_TOKEN_TO_BE_REPLACED