You are here: Home / Archives for leadership 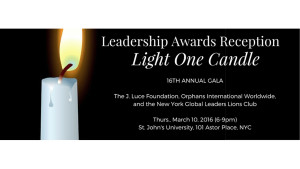 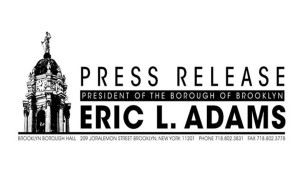 BROOKLYN, NY, July 31, 2015: On Friday, Brooklyn Borough President Eric L. Adams unveiled the parks funding component of his capital budget plan during a press conference at the Brooklyn War Memorial, located inside Cadman Plaza Park in Downtown Brooklyn. Standing beside the leadership of the Department of Parks and Recreation, elected officials, park advocates, and local veterans from across the borough, including former Brooklyn Borough President Howard Golden, he outlined the details of his $11.9 million in allocations during Fiscal Year 2016, which represents more than a twofold increase from last year in his budgetary commitment to enhancing Brooklyn's open space. “From Greenpoint to Gowanus, from Cypress Hills to Canarsie, I am investing in open space that benefits Brooklynites … END_OF_DOCUMENT_TOKEN_TO_BE_REPLACED 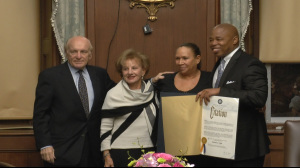 ST.FRANCIS COLLEGE THE SMALL COLLEGE OF BIG DREAM Dedicated to the Founder and Publisher of “The City Sun” Newspaper Pays Tribute to Thomas J. Volpe with THE THOMAS J. VOLPE Distinguished Leadership in service award. Created in his Honor Hosted by Brooklyn Borough president ERIC ADAMS Tuesday November 18th 2014 Brooklyn Borough Hall What powerful Good News for the world to hear, this is the “real thing” where people respect people. You are all here for the world’s community, and givers with your soul’s and actions. What an honor for www.goodnewsplanet.com and www.peacedayparty.org to be part of this important event. We are editing the event right now and wondering if you can share your program in an email form. We will place this content next to the two part special. We … END_OF_DOCUMENT_TOKEN_TO_BE_REPLACED 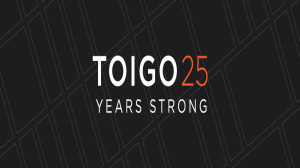 It Starts with Students & Finishes with Leaders  www.toigofoundaton.org A Toigo leader is a person of unique perspective and vision focused not only on his/her own development and advancement, but also that of others, while upholding the highest degree of excellence, ethics and integrity. st two decades. 2011 Toigo Institute launches Toigo All A Board to drive increased board diversity and Groundbreakers, a summit for female leaders as part of its advancement initiatives. General Colin Powell (USA) Ret., honored with Lifetime of Leadership AWard at Toigo’s annual gala. 2010 Toigo launches the Toigo Institute for Leadership Excellence Advancement and Diversity (I-LEAD), extending the power and impact of its leadership programs to minority mid- and senior-career … END_OF_DOCUMENT_TOKEN_TO_BE_REPLACED 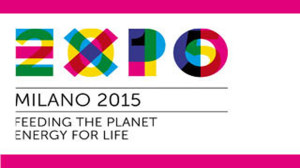 American Food 2.0: United to Feed the Planet What Is Expo Milano 2015? • The next World’s Fair is in Milan, Italy from May 1 to October 31, 2015 • With the theme “Feeding the Planet, Energy for Life,” the Expo will promote a global dialogue about the future of our food system • The United States of America is among 147 participating nations The USA Pavilion at Expo Milano 2015 • The USA Pavilion, “American Food 2.0: United to Feed the Planet,” will showcase American leadership on global food issues, including food security and policy, science and technology, nutrition and health, and culinary culture. • The main components of the USA Pavilion program are: o Farm to Table and Back to Farm - Interactive exhibits taking visitors through the food system o Innovation … END_OF_DOCUMENT_TOKEN_TO_BE_REPLACED

In 2020 we will take our event to 193 countries and other locations to create the largest world gathering & broadcast to share Peace, … END_OF_DOCUMENT_TOKEN_TO_BE_REPLACED