You are here: Home / Archives for singers 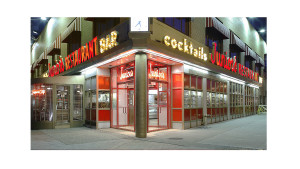 Welcome to Junior's! Hail a taxicab anywhere in New York City and tell the driver, "Take me to the best cheesecake in New York." Odds are you will end up at the corner of Flatbush and DeKalb Avenues in Brooklyn, at Juniors. Founded by Harry Rosen in 1950, Junior's landmark restaurant is known as the home of New York's best cheesecake. For decades, Brooklynites (and other New Yorkers) have come to eat, laugh, and kibbtiz (argue) over cheesecake. In the 1950's, an entire generation came of age at Junior's. Our cheesecake was as important as the Brooklyn Dodgers...the Fox Theater...Coney Island...Brighton Beach. Today loyal customers still come --from all over and all walks of life. Famous mayors. Presidents. Hall of Fame athletes. Authors, singers, movie stars. In fact, it's as true today … END_OF_DOCUMENT_TOKEN_TO_BE_REPLACED

DARYL HALL TAKES HIS HOME ON THE ROAD: THE LIVE FROM DARYL’S HOUSE NU-SOUL REVUE, FEATURING SHARON JONES AND ALLEN STONE, READY FOR APRIL LIFT-OFF Live version of Webby Award-winning and Syndicated TV show gets underway April 11 in Montclair, NJ, ends with show at N.Y.’s historic Beacon Theatre April 21 LOS ANGELES, Feb. 16, 2011—Daryl Hall, who has taken fans inside his home for the critically acclaimed, nationally televised web series Live from Daryl’s House, is now ready to take his show on the road. The award-winning program, which recently marked its 50th episode, is set for a seven-city U.S. tour, the Live from Daryl’s House Nu-Soul Revue Featuring Daryl Hall and the LFDH Band with special guests (and former show participants) neo-soul stars Sharon Jones plus Allen Stone. The tour … END_OF_DOCUMENT_TOKEN_TO_BE_REPLACED

In 2020 we will take our event to 193 countries and other locations to create the largest world gathering & broadcast to share Peace, … END_OF_DOCUMENT_TOKEN_TO_BE_REPLACED