The City of Makati

You are here: Home / Communities / Asia / Filipino Good News / The City of Makati 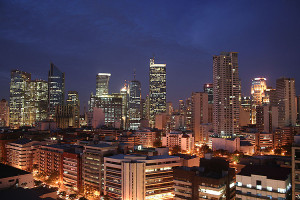 The City of Makati, in the Philippines, is one of the sixteen cities that make up Metro Manila. Makati is the financial center of the Philippines. As the host of various embassies, it is also an important center for international affairs.

With a population of 529,039, Makati is the 16th-largest city in the country and ranked as the 41st most densely populated city in the world with 19,336 inhabitants per square kilometer.

Makati became the financial center of the Philippines during the 1960s. It is home to the Philippine Stock Exchange and the Makati Business Club.

Makati is notable for its exceptionally multicultural lifestyle, as a significant center for intercontinental matters and for its reputation as a major entertainment center in the metropolis.  The city is also known for its cosmopolitan culture because of its major shopping centers, condominiums, financial hubs, hotels, and entertainment hubs, which are located around the city.

According to tradition, the first Governor-General of the Philippines Miguel López de Legazpi, while exploring a swamp near the Pasig River, asked for the name of the place but, because of the language barrier, was misinterpreted by the Tagalog people. Pointing to the receding tide of Pasig River, the Tagalogs answered, “Makati, kumakati na,” literally meaning ebbing tide.

The city started out as part of the wide municipality of Santa Ana de Sapa (part of Manila today) and in the 1600s began to be developed as a pilgrimage center around the churches of Our Lady of Guadalupe (now Our Lady of Grace) and of Saints Peter and Paul in what is today the city proper, built by the friar orders to attract the faithful, and also as a farming community. It became independent in 1670 as a full-time municipality, then named San Pedro de Macati in honor of St. Peter, its patron. The town was also from the 18th century onward famous for its pottery industry.
American occupation

By 1898, Spain ceded the Philippines to the United States after the former’s defeat in the Spanish-American War. In 1901, the Americans declared the whole area south of the Pasig River, including the town of San Pedro de Macati, down to Barangay Ayala Alabang, a US military reservation; thus establishing Fort McKinley, which is currently known as Fort Bonifacio. That same year, the whole town, with a population of 25,000, was incorporated from Manila to the province of Rizal with Marcelino Magsaysay serving as the town president. As the 1910s approached the Meralco tranvia lines to Fort McKinley and to the western end of the town were built, opening transport lines for its residents and thus brought along potential investors who opened several businesses including the famous Sta. Ana Cabaret at the terminus of the streetcar lines. In February 28, 1914, the The Philippine Legislature passed Act 2390, shortening the name San Pedro de Macati to simply Makati. In the 1930s, the first airport in Luzon island, Nielsen Field, opened in what is now the Ayala Triangle, and the tracks of what is now the Philippine National Railways reached the town very early in the decade. Also opened during that period was the modern Sta. Ana Park, the nation’s second horse racing facility.
Post-World War II

Even through the town was damaged in the midst of the Second World War its people rose from the devastation to build its destiny as the financial and commercial center of the nation.

After World War II, the town grew rapidly, and real estate values boomed. The first centrally planned communities (in what is now Barangays Forbes Park, Urdaneta, San Lorenzo and Bel-Air) were established in the 1950s with the help and support of the Ayala family, and since the late 1960s, Makati has been the undisputed financial and commercial capital of the country especially during the terms of town mayors Maximo Estrella, Rafael Bañola, Jose Luciano and Nemesio Yabut who encouraged the massive development of the town and welcomed foreign and local investors to what was tagged as the nation’s no.1 municipality at that time. Makati’s location also made it an industrial hub for major corporations.

In the 1980s, Makati has also figured prominently in the political history of the Filipinos. The community was one of the cradles of Filipino passive resistance against Spanish colonial rule in the 1890s and the Philippine Revolution that resulted (Barangay Pío del Pilar is named after the namesake hero who was born in Makati in what was then Culi-Culi village). And following the assassination of Ninoy Aquino in 1983, it became the epicenter of the protest movement against the dictatorship of President Ferdinand E. Marcos, the resulting climax which known historically as the People Power Revolution would happen only several years after the Confetti Revolution events of 1983-84 held in the central business district. After the revolution and the downfall of the Marcos’ 20-year presidential regime, Corazon C. Aquino, the wife of the deceased senator Aquino, became the new and first female president of the Republic of the Philippines and Asia. After the death of Mayor Nemesio Yabut during the People Power Revolution, she appointed Jejomar Binay as the acting mayor of the town of Makati and was elected as mayor in 1987. His first term as the town executive would see the events of the 1989 coup attempt happen right in the town’s business district and would witness the building of the first skyscrapers as the 1990s arrived.

By January 2, 1995, Makati became an independent city by virtue of Republic Act 7854 and in the June 30, 1998, The Lone District of Makati City was separated and divided into 2 districts. Lone district Rep. Joker Arroyo became the representative of the first district, while Senator Agapito Aquino was elected representative of second district. Elenita Binay served for only three years (one term) as the first and only female city mayor so far.