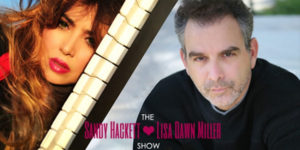 LOS ANGELES – The crowd-pleasing musical, “Sandy Hackett’s Rat Pack Show,” now in its tenth season, will be appearing at the Palace Theater in Waterbury, CT on Friday March 6 and the Tarrytown Music Hall in Tarrytown, NY on Saturday March 7. The show stars Sandy Hackett, son of the illustrious comedian Buddy Hackett, and his wife, Lisa Dawn Miller, daughter of legendary songwriter, Ron Miller.

“Sandy Hackett’s Rat Pack Show,” which has stacked up rave reviews over the years, is a theatrical, musical production which recreates what it would have been like to see legendary icons, Frank Sinatra, Dean Martin, Sammy Davis Jr. and Joey Bishop live onstage together.

“God sends the Rat Pack back to do one last show. They arrive in their prime but they are sent back to modern day so we get to weave current events into show,” said Miller who plays “Frank’s One Love,” a character based on Sinatra’s relationship with Ava Gardner. “Sandy’s father, Buddy Hackett, plays God. Frank, Sammy, Joey and Dean were all his friends and Sandy grew up with them. There is a lot of room for improv in the show, as it was with the real Rat Pack. Sandy is brilliant as Joey Bishop and is the comedy genius that has made our show so successful.”

Lisa has her own connection to the Rat Pack. Her father was songwriting legend, Ron Miller. “Every singing member of the Rat Pack recorded and performed my father’s classic standard, ‘For Once in My Life,’” Miller said. Hackett continued, “My wife brings her musical genius to the show, both as a creator and performer, which really sets our show apart from anything else out there,” Hackett said.

Sandy, who is working on a book about his father, “My Buddy,” to be released late this year, tours nationwide as a comedian and with his one-man show of the same name (directed by Miller), a live theatrical production about his close relationship with his dad and the ten years they spent touring together. www.mybuddyhackett.com

Lisa, a producer and singer/songwriter, is developing a new musical, “For Once in My Life,” about the life of her father whose hits, in addition to “For Once in My Life,” include “Touch Me in the Morning,” “A Place in the Sun,” “Heaven Help Us All,” “Yester-Me, Yester-You, Yesterday,” “If I Could,” “I’ve Never Been to Me,” “Someday at Christmas,” “Everyone’s a Kid at Christmas Time” and many more. She has released several recordings and directed numerous music videos. She also heads up her own music publishing company, LDM Publishing; manages her father’s vast legacy catalogue; tours throughout the country and manages the careers of her children, 18-year-old actor/singer, Oliver Richman, freshman at New York University Tisch School of the Arts and 13-year-old actor/singer/dancer, Ashleigh Hackett, a middle schooler, also a student of the performing arts.