You are here: Home / Health / THE LIFE-CHANGING TECHNOLOGY THAT CAN HELP YOU & YOUR FAMILY GET THROUGH THIS FLU SEASON 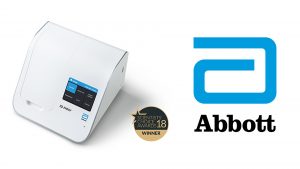 Dr. Douglas L. Ambler, internal medicine physician at Northwestern Medicine Central DuPage Hospital and medical director of quality for Northwestern Medicine Regional Medical Group, alongside Norman Moore, PhD., Director of Scientific Affairs of Infectious Disease with Abbott Rapid Diagnostics to talk about the importance of flu testing and how best to detect and treat the flu this upcoming season.

As another flu season rapidly approaches, the need for fast, accurate flu testing is more important than ever.

The flu, or influenza, is a highly contagious viral infection that attacks the respiratory system, and is sometimes mistaken for the common cold, making it difficult for people to receive the treatment they need. With rapid flu testing at the point of care, people can be diagnosed and treated for the flu within minutes, right at their doctor’s office or nearby walk-in clinic.

The flu spreads easily and can pose serious risks for certain groups, including some of our most vulnerable populations – children, pregnant women, elderly adults and people with chronic disease or weak immune systems. According to the CDC, in the U.S. there are an estimated 9.3 to 49 million flu cases each year. The flu and its complications cause as many as 960,000 hospitalizations every year, and according to recent data from the CDC, nearly 80,000 people died from the flu last year.

It’s important to get tested by a doctor if you think you have the flu. Antiviral medications that attack the flu virus work best when administered early – within 48 hours of the onset of symptoms – and speed your path to recovery. And knowing now means you can take precautions from spreading the flu to others if you are infected.

Medical experts say it’s never too early or late to begin preparing for the flu season, especially given the last flu season was so brutal. Since flu season is incredibly unpredictable, making sure you and your family are prepared is for everyone’s benefit, not just your own.

Woodstock Program for sale on PBS
Next Post: media advisory (Wed at 11am): Harlem Globetrotter delivers message in sign language to deaf students