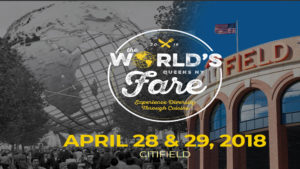 The last World’s Fair was hosted in Flushing Meadows-Corona Park in 1965 and was themed “Peace Through Understanding.” Millions of visitors attended the fair to explore the countries that were represented from around the world.

Now, more than 50 years later, Schneps Communications will be reimagining one of the most iconic fairs by hosting “The World’s Fare” at CitiField. Over 100 vendors will come together in New York City’s most diverse borough and unite through authentic food, drink and music curated by the city’s leading culinary advocates. The World’s Fare will be a grand celebration, advocating equality & diversity in the food industry, and promoting incredible male and female talent that make New York City’s food scene so unique.

The World’s Fare has formed a culinary committee co-chaired by renowned Danish chef Claus Meyer, American author, journalist and culinary historian Doctor Jessica B. Harris and Singapore based KF Seetoh who is the creator and curator of The World Street Food Congress. Meyer, Harris and Seetoh will champion and support chefs, restaurants, street food vendors and food businesses participating in the event.

“The World’s Fare is an opportunity to sample some of the finest flavors the world has to offer, all in one venue,” said celebrity chef, entrepreneur and philanthropist Meyer. “This is a unique opportunity, one that not only reflects the incredible diversity of Queens but is rooted in the passion of the many peoples who have traveled from across the globe to call this great borough home. I can’t wait to join the other passionate foodies. We are excited to discover and celebrate what is surely to be the culinary event of the year.”

“If you celebrate your affinity for world communities through its flavors via humble cooks that express their heritage and progressive cultures on an affordable platter, then this is a great celebration,” said Seetoh. “And The World’s Fare could become the finest festivals to experience it at. World street food is not just about eating off a street cart or truck, it is a culinary culture that 80% of the world feed on and enjoys regularly, across many platforms- because it resonates and bonds. Enjoy the food, and digest the culture.”

The Melting Pot Foundation USA, the nonprofit organization founded by Meyer, will be onsite at The World’s Fare to communicate the community culinary center’s mission of
offering delicious and accessible healthy foods and career training in the culinary arts. One dollar of every ticket sold will go to The Melting Pot Foundation USA and special VIP tickets will be sold to experience a food tour at The World’s Fare with Chef Meyer and food guru Seetoh.

“When it comes to passion, diversity and creativity in food, there is nothing like New York City,” said Liza deGuia, the founder of food. curated. who is leading curations for the festival. “I wanted to assemble a team of local tastemakers who are experts or enthusiasts in specific cuisines, people who always aim to uncover the latest dishes and shine a light on small, specialty food businesses who are doing something different, something that expands our exposure to new cultures and flavors. Each tastemaker will hand-select vendors to cover a wide array of foods to showcase at The World’s Fare. We want the selection to be both affordable and unique with a main goal: to create wonder in bite sized experiences.”

The World’s Fare will be hosted Saturday, April 28 and Sunday, April 29, in the parking lot of iconic Citi Field, home of the New York Mets. The ballpark is centrally located in New York City, near the 7 line and a short distance from Flushing Meadows-Corona Park. The location is intended to bring back memories of the World’s Fairs of the past, by being in the shadow of the landmarks and structures that were built around them, including the Unisphere and the New York State Pavilion.

“Our political climate has never called for a greater opportunity to embrace and celebrate ethnic and cultural diversity. The Festival embraces everything great about New York City, its people and food,” said Joshua Schneps, The World’s Fare President and Organizer.

In addition to the food and drink offerings, throughout the weekend live music will be performed by bands representing about a dozen cultures as well as a SUMO demonstration from World Champions, art installations including Lego art, 4 dimensional drawings, street art and painted scripture.
Event Highlights Chefs, restaurants and street food vendors representing as many as 100 cultures.

An expertly curated international beer garden will offer tastings of over 80 craft beers from about 45 breweries.

Scholarships to attend The World’s Fare, free of charge, for 4 food vendors selected by committee members and tastemakers.

Awards for best food determined by committee members and tastemakers.

Art, music and activities embracing and transcending many different cultures and age groups are an integral part of the festival.

The World’s Fare will be a family-friendly event running from 11am – 8pm on both days. Tickets are being sold for entry for access to vendors and activities as well as to the international beer garden in a separate, ticketed, over-21 area. Tickets are available online at www.theworldsfare.nyc. ;

Chefs, food vendors and others selling unique cultural items that are interested in selling and applying for the scholarship at the World’s Fare may do so online at www.theworldsfare.nyc. ;

Schneps Communications is a media and events company with properties that dominate locally with award-winning content across community newspapers, magazines, digital assets and the most powerful group of events in New York City and Long Island.

Claus Meyer is a culinary entrepreneur, food activist, cookbook author, professor and TV host. He is the founder of the New Nordic Cuisine movement. Meyer owns and operates Great Northern Food Hall and Michelin-starred Agern, both in the Vanderbilt Hall of Grand Central Terminal. He is also co-owner of Norman in Greenpoint, Brooklyn with Swedish chef Fredrik Berselius. He is also the founder of The Melting Pot Foundation, which operates as a nonprofit in Denmark, Bolivia and Brownsville, Brooklyn.

Doctor Jessica B. Harris is an American culinary historian, cookbook author and journalist. According to Heritage Radio Network, there’s perhaps no greater expert on the food and foodways of the African Diaspora. She is the author of twelve critically acclaimed cookbooks documenting the foods and foodways of the African Diaspora including Iron Pots and Wooden Spoons: Africa’s Gifts to New World Cooking, Sky Juice and Flying Fish Traditional Caribbean Cooking, The Welcome Table: African-American Heritage Cooking, The Africa Cookbook: Tastes of a Continent, Beyond Gumbo: Creole Fusion Food from the Atlantic Rim. Harris also conceptualized and organized The Black Family Reunion Cook Book. Her book, High on the
Hog: A Culinary Journey from Africa to America, was the International Association for Culinary Professionals 2012 prize winner for culinary history. Her most recent book is My Soul Looks Back: A Memoir.

K.F. Seetoh is a prominent food consultant, photographer, writer and cable television host based in Singapore. He is best known for creating the popular hawker food guide and street food halls, Makansutra and is the creator and curator of The World Street Food Congress. He was also tapped as consultant to Anthony Bourdain, who was working to develop an international market on Manhattan’s West Side.

Liza de Guia is the Founder and Chief Storyteller of food. curated., which is an award-winning long form food documentary series launched in 2009. Liza has earned prestigious awards including a 2015 James Beard Foundation Award for Best Video Blog, a 2015 Saveur Magazine Award for Editor’s Choice: Best Use of Video, 5 James Beard Award Nominations from 2010-2015, a 2012 Webby Award for Online Film & Video: Documentary Series, a Taste Award for Best Organic or Green Program, a 2010 & 2011 Village Voice Award for food storytelling and Filmmaker of the Year at the 2012 NYC Food Film Festival.

The Melting Pot Foundation USA is a community culinary center based in Brownsville, Brooklyn. For more information visit www.meltingpotfoundation.org

Thought for the Day…
Next Post: The Bannerman Castle Trust’s Tour Boat, the Estuary Steward Video coming for this wonderful tour