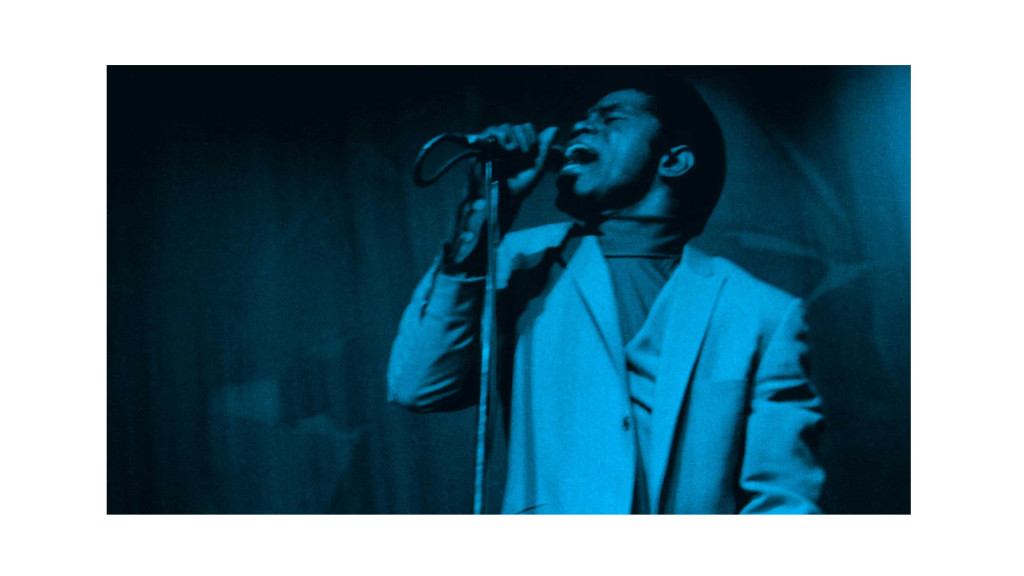 (Harlem, NY, November 4, 2015) The Apollo Theater Education Program pays homage to Apollo Legend, James Brown, with a free special screening and discussion of Alex Gibney’s highly acclaimed documentary, Mr. Dynamite: the Rise of James Brown, on Thursday, November 12th at 6:30pm. The documentary covers the peak of Brown’s career with rare video clips, never-before-seen photographs from his estate, and fresh interviews with some of his closest personal and musical associates. The result is new insight into a man whose life and career made an indelible and everlasting impact on entertainment and culture.
This free event will be presented as part of the Apollo Live Wire Series and will include a discussion with:
Alex Gibney, acclaimed Director of Mr. Dynamite and Emmy Award-Winning Director of Going Clear: Scientology And The Prison Of Belief,
Geeta Gandbhir, Supervisory Editor of Mr. Dynamite and Emmy Award-Winning Editor of When the Levees Broke,
Harry Allen, acclaimed Hip Hop journalist and activist,
Michael Veal, Ethnomusicologist and Professor of Music and African American Studies and American Studies at Yale University and
(Moderator) Harry Weinger, special consultant to the film and Grammy Award -Winning reissues producer.
Image removed by sender.The Mr. Dynamite: the Rise of James Brown screening at the legendary Theater is a return home for the “Godfather of Soul.” Brown, an Apollo Legend, has a longstanding history with the Theater that dates back to the 1950’s when he won Amateur Night at the Apollo. Brown would go on to record his classic Live at the Apollo album at the legendary Theater. Throughout his career James Brown performed on the Apollo stage over 200 times. After his death in 2006, his body lay in state on the iconic stage where members of the community were able to pay final respects. The Theater later inducted Brown into its Apollo Walk of Fame in 2007.
Apollo Live Wire discussions invite deeper engagement with the Apollo’s artistic programming. These discussions are recorded for inclusion in the Theater’s archives. Live Wire Discussions are free and open to the public. Seating is limited; Pre-registration is strongly suggested at apollotheater.org/event/mr-dynamite-james-brown/
For exclusive photos, updates and more use the hashtags: #MrDynamite #ApolloLiveWire and connect with us on Twitter @ApolloEd @Apollotheater
About Apollo Education

The Apollo Theater Education Program extends the Apollo’s commitment to enhancing the life of the community. The Education Program focuses on four distinct areas of learning and engagement: residencies, workshops and tours for schools; curriculum materials aligned to state and national learning standards and study guides derived from the Theater’s history; career development for teens and adults through the Apollo Theater Academy; and discussions and lectures for the public that highlight the history of the Apollo and its impact on American art, culture and entertainment. For more information on Apollo Theater Education, visit www.apollotheater.org/education/; follow on Twitter @ApolloEd or stay connected through Apollo Theater Education’s Facebook page.
About The Apollo Theater
The legendary Apollo Theater—the soul of American culture—plays a vital role in cultivating emerging talents and launching legends. Since its founding, the Apollo has served as a center of innovation and a creative catalyst for Harlem, the city of New York, and the world. With music at its core, the Apollo’s programming extends to dance, theater, performance art, spoken word initiatives, and more.
This includes the October 2014 premiere and 2015 international tour of the dance celebration project – James Brown: Get on the Good Foot, the annual Africa Now! Festival, Apollo Club Harlem and the upcoming New York premiere of the opera Charlie Parker’s YARDBIRD. The Apollo is a presenting organization that also produces festivals, large-scale dance and music works organized around a set of core initiatives: Apollo Music Signature Programs—Amateur Night, Salon Series, Apollo Music Café; Legacy Series – work that celebrates and extends the Apollo’s legacy through a contemporary lens; Global Festivals including the Women of the World (WOW) Festival and Breakin’ Convention, international and U.S.-based artist presentations focused on a specific theme; and Special Projects, multidisciplinary work with partner organizations.
Since introducing the first Amateur Night contests in 1934, the Apollo Theater has served as a testing ground for new artists working across a variety of art forms, and has ushered in the emergence of many new musical genres—including jazz, swing, bebop, R&B, gospel, blues, soul, and hip-hop. Among the countless legendary performers who launched their careers at the Apollo are D’Angelo, Lauryn Hill, Machine Gun Kelly, Miri Ben Ari, D’Angelo, Ella Fitzgerald, Sarah Vaughan, Billie Holiday, James Brown, Michael Jackson, Gladys Knight, Luther Vandross, and Stevie Wonder; and the Apollo’s forward-looking artistic vision continues to build on this legacy.
The Apollo Theater is a not-for-profit organization and currently in the midst of fundraising for its 21st Century Apollo Campaign, created to extend the institution’s role in fostering artistic innovation and in building appreciation of American culture around the world. Visit www.apollotheater.org.
Leadership support for Apollo Education programs from Ronald O. Perelman Family Foundation. Additional support from the Mitsubishi UFJ Foundation, Coca-Cola Foundation, Con Edison, Ella Fitzgerald Charitable Foundation, General Motors Foundation, Insperity, The Reginald F. Lewis Foundation, Pinkerton Foundation, the QBE Foundation and public funds from the New York City Department of Cultural Affairs in partnership with the City Council.
The Apollo’s 2015-2016 season is made possible by generous support from American Airlines, BNY Mellon, Citi, Coca-Cola, Troy and Keisha Dixon, EmblemHealth, Frederick Wildman, The Howard Gilman Foundation, Carla A. Harris, Robert K. Kraft, The Reginald F. Lewis Foundation, The Parsons Family Foundation, the Ronald O. Perelman Family Foundation, JoAnn Price, Earl W. and Amanda Stafford, Time Warner Inc., the Reginald Van Lee New Works Fund, the Apollo Board of Directors and many other generous donors.
Lead annual support is also provided by public funds from the New York State Council on the Arts with the support of Governor Andrew Cuomo and the New York State Legislature, the National Endowment for the Arts, and the New York City Department of Cultural Affairs in partnership with the City Council. Stafford, Time Warner Inc., the Reginald Van Lee New Works Fund, the Apollo Board of Directors and many other generous donors.