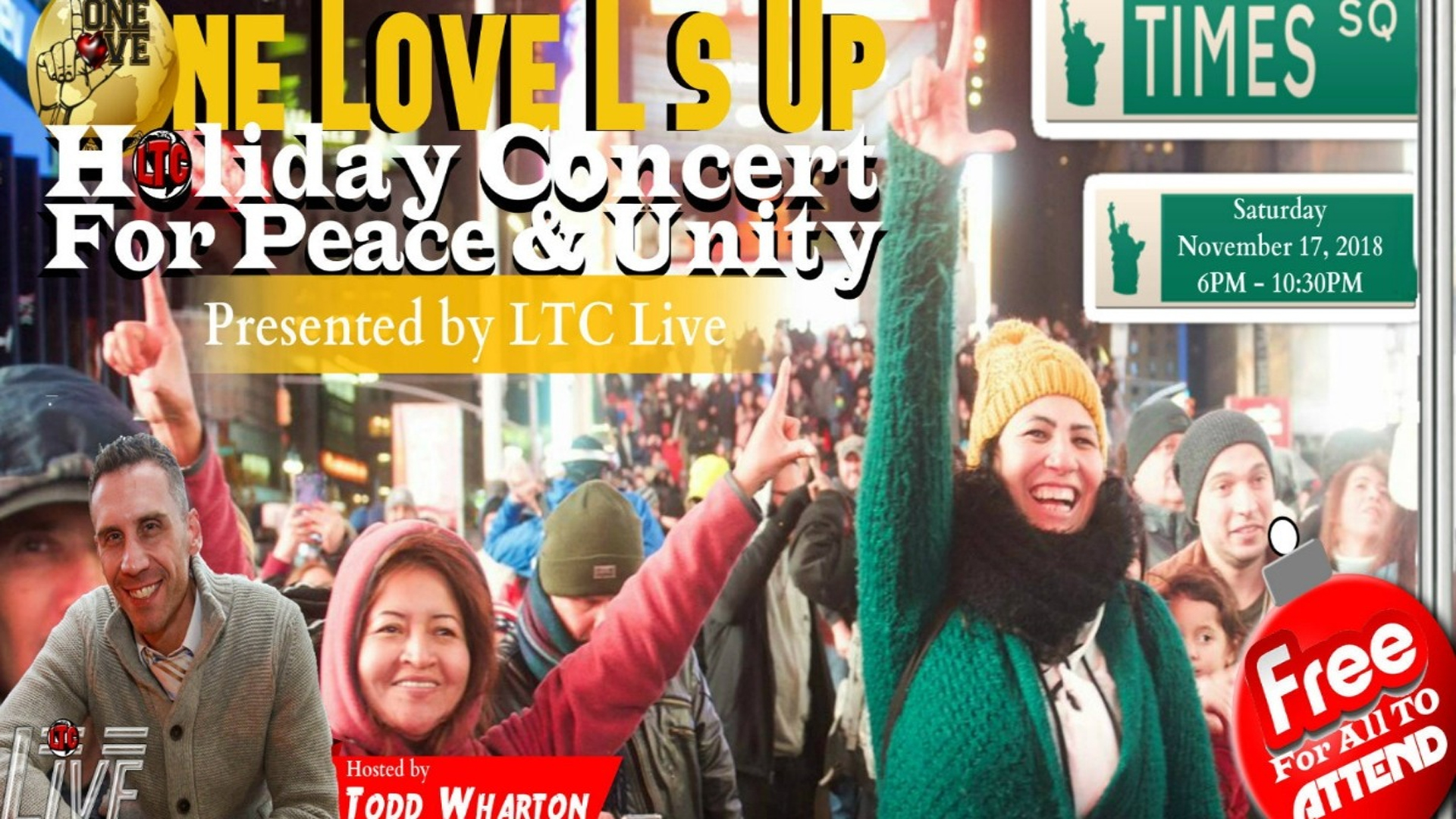 On Saturday, November 17, 2018 from 6PM – 10:30PM (A movement supported by the city of NY) The 2nd Annual “One Love L’s Up Holiday Concert for Peace & Unity” presented by LTC Live, will take place in Times Square/Father Duffy Square in the heart of NYC.

Hi, my name is Todd Wharton, CEO & Founder of LTC, Host of LTC Live and the Creator of The One Love L’s Up Global Movement & Concert for Peace & Unity. NYC is the greatest city in the world, not because of the food, the skyscrapers, the entertainment, etc… IT’S BECAUSE OF THE PEOPLE. We forget how special and beautiful this world is until you stand in the heart of NYC and at that moment you realize in one place, people from around the world from every race, religion, gender, sexual preference, young, old, rich, poor, etc.. are doing one thing; celebrating life without the fear of being afraid of who they are with the drive that know matter where they are from in the world #IamNYC , because NYC is the world.

This concert/movement has been created not because of a tragedy, but to try to prevent future ones. A concert not to happen just once, but a movement to take around the world to promote L’s Up (a symbol of peace and hope to let everyone know you are an equal of this earth)
A movement that unites all charities and all movements for one goal, to get one step closer to that Utopia.

Humans have been at war with each other since the dawn of time and we are fighting battles and rules based on those from the past that mocked what they don’t understand. You have a choice, a human virtue that only you control.

We are asking for your support. Anyone can say “Well I liked your post”, but it’s the ones that give a little or a lot, who show up and the ones that get off their computer to be a part of history to help celebrate life and not aid in destroying it. Help us change the course of time and make our future better for those generations to come.

Bob Marley has proven that a voice can be strong through music to promote peace and love. He was so determined that after being shot for what he believed in, 2 days later he got back up on that stage and sang. When asked “Why” he said “There are those that are trying to make this world worse and they are not taking a day off. How can I? Light up the darkness”

Please help us make a difference. This is your world as well.
One man can change the world, but together we can change the course of man and woman in a positive way.

My name is Todd Wharton and I approve this message

CARNEGIE HALL! Nearly Sold-Out! Christmas in Italy®
Next Post: Reminder – Tomorrow: Screening of the documentary film Enemies of Peace – Preventing the Next War in the Middle East