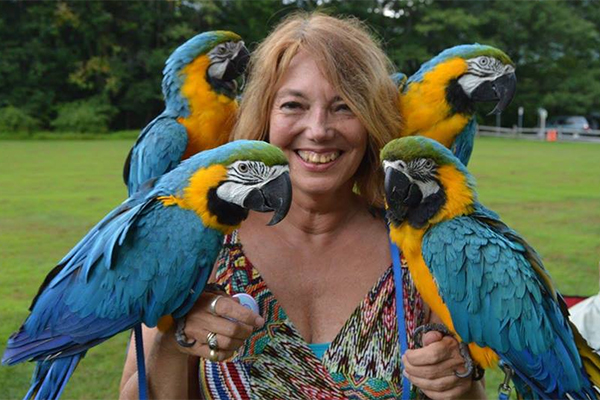 The unbearably loud noise came from five exotic macaws caged in the loft area directly above the art show. Three of those birds were bred in captivity, a nearly impossible feat. Waslyn’s feathered friends are billed as the “Parrots for Peace,” either the subjects, or props, for her featured portraits, depending on your interpretation.

On one wall was a series of photographs taken of late musician and environmentalist Pete Seeger. The next wall depicted Yoko Ono and her son Sean Lennon, captured by Waslyn’s lens at her previous United Nations photo exhibit. Other shots contained familiar local Kingston faces, such as creative director Drew Andrews; and Jessica Clegg, daughter and political campaigner for deacon turned candidate David Clegg. Some images were simply strangers on the street. All of them are holding her birds.

Gloria Waslyn, 68, is exceedingly talented at two basic things: taking pictures of people; and getting them to hold her big beautiful and terrifying gnarly-taloned beasts. Giant animals that could claw through skin or cut cartilage with vice-grip beaks. And screech like a pterodactyl from Hell.

Every night, she feeds them scrambled eggs, and sings them to sleep.

Odds are, if you’ve shown your face in Ulster County during the last 10 years, Gloria Waslyn has taken your photo, several times over. At least one time, holding her birds. 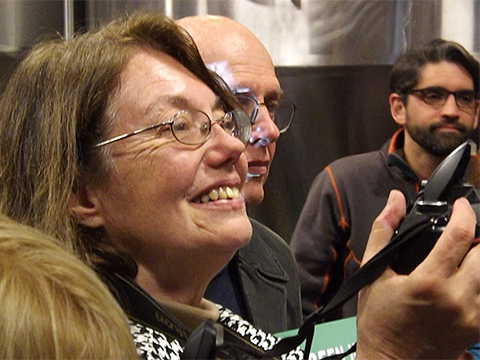 Strangers first ask, ‘who is this person, why is she taking my picture, what will it be used for?’ Others simply reassure, ‘don’t worry, that’s just Gloria; she takes pictures of everyone, and puts them on her Facebook page.’ She has an uncanny knack for drawing her subjects out of their cages and creating unbelievably candid portraits.

Some of those portraits show these people in the ridiculously unlikely situation of having four or five azure and yellow Ara ararauna, perched across their outstretched arms, looking like they were suddenly dropped from another planet.

Considering an average life span of several hundred years, these birds will probably outlive our great-great-grandchildren. They’re not passing through our lives, but rather we through theirs. Watch out, or Ms. Waslyn and her birds might sneak up on you one day – so long as those pesky parrots don’t eat her camera first.