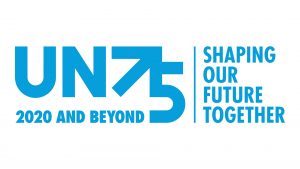 We invite you to view Unity Foundation’s programs to commemorate the 75th Anniversary of the Founding of the United Nations.

Unity Foundation has produced a series of video presentations and a on-line exhibit to Celebrate The United Nations 75th Anniversary.

1.) UN 75th Anniversary featured on the foundation’s Positive Spin television program. The show is scheduled to air nationally in the United States on Saturday, June 27th, at 4 PM (Eastern) 1 PM (Pacific Time) on DISH Network (Channel 9415) and DirecTV (Channel 348) The show will also air on cable stations throughout the United States. In addition, the program will stream live from the Free Speech TV website www.freespeech.org and is available on Sling TV, Apple TV and Roku. (to view the program on the Free Speech TV website please check the time zone box to make sure you are viewing in your time zone.)

Please see the link below for the Positive Spin television program.

3.) A special exhibit on the founding of the United Nations in 1945, features 65 official archival photographs from the UN.
The exhibit can be viewed on the Museum of The City of San Francisco website – www.sfmuseum.org
(Click on the Select A Major On-Line Exhibit box, and then on the United Nations. This will take you to the exhibit page.)
Under the title Text and Slide Shows, the exhibit begins with “Arriving at the United Nations Conference in 1945.