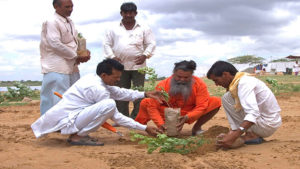 “My son, you are mine for all eternity. You are my true ambassador. All religions of the world lead to the one light. It is the aim of every human to realize God the Almighty and thus become one with him. But, mankind suffers from unspeakable physical and mental sorrow. It is your duty to soothe this pain by bringing to them the holy message of DIVINE KNOWLEDGE. Teach all people – men, women, young and old, rich and poor – the highest techniques of the Divine science of Yoga. Help them to lead a natural life free from illness and show them the way to true knowledge.”

with this message, received from Bhagwan Sri Deep Narayan Mahaprabhuji in a deep meditation, began the spiritual path of Paramhans Yogiraj Swami Maheshwarananda, one of the greatest Spiritual Masters in the World today.

Early years
Vishwaguruji was born on the August 15, 1945 in the village of Rupawas, in the district of Pali, Rajasthan. His parents, Pandit Krishna Ramji Garg and Srimati Phool Devi Garg, both devout and religious people, gave him the name of Mangilal. As a young child, most of his free time he devoted to prayer and meditation. Whilst still in his teens, he was ordained as swami by his Guru, Hindu Dharmsamrat Paramhans Sri Swami Madhavanandaji, with whom he lives in ashram for several years, performing strict anusthana, spiritual practices…

for more info, go to https://www.vishwaguruji.org/swamiji